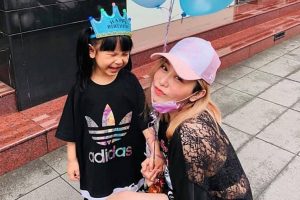 Lan, 35, married the chief financial officer of a technology company in 2012. They have a daughter, nicknamed Tong Tong.

However, the couple called it quits last year due to compatibility issues, ending nearly seven years of marriage.

Since the divorce, Mr Tong has posted many allegations against his former spouse on Facebook. He wrote in one: “Regrettably, six years have passed and we could not go on any longer. I have tried my best to take care of this family, but you weren’t prepared for married life.”

He accused the singer of “treating home like a school dormitory”, alleging that she would spend half her time at home and the other half at her friend’s house.

Mr Tong also complained that although he often encouraged her in her career, he did not feel acknowledged: “You often thank so many people in your speeches, but not once have you mentioned my name.”

He added that her focus on her career made her neglect her daughter, and accused her of preferring her friends to her daughter.

According to Oriental Daily News, Lan has denied Mr Tong’s accusations, saying: “It’s regrettable that my efforts in our marriage have not been felt.”

The singer has filed for a protection order as the verbal abuse from Mr Tong during and after their marriage had become “intolerable”.