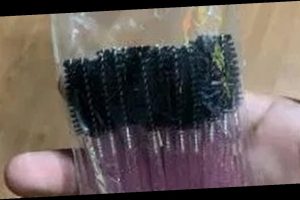 A bloke who was sick of being the only singleton in his circle of friends has revealed a sneaky plan to sabotage their relationships.

The lad, who goes by the name Pedro online, shared his cunning plan on Twitter which had mixed reviews from people.

He tweeted about his plot to break up all his pals' romances under the social media handle @WolfOfDallass.

Sharing a photo of a multipack of pink glittery eyelash combs, Pedro claimed he was "tired of being the single friend".

The fella added: "So I bought these to leave in all my boys' cars so they can get into an argument with their girls."

And by leaving the grooming product, it could cause arguments, as well as cheating accusations among the couples.

He wrote: "Me in the seat laughing along to this tweet with the boys like I haven't just dropped one of these h**es in the door pocket."

One fan, who tagged a friend in the message, wrote: "I don't like that you liked this tweet… Better not get any ideas for my car."

Another commented: "Wait on a real I need some of these… Where do you buy them?"

Others tagged their pals, adding: "I'm doing this to you."

Meanwhile, one bloke joked: "This is the chaotic evil I am always here for."

While some other Twitter user suggested: "Nah leave some hair ties in there."

However, other social media fans claimed the man was evil for trying to split up mates' relationships when he was the only single lad.

One said: "The devil works hard but y'all single boys work harder. This is a whole break-up you're causing lol."

A second claimed: "No offence, but s*** like this is the reason you're single."

While a third, who was commenting under the photo, slammed: "That's f***ed up."

And a fourth labelled the bloke "a whole a** home wrecker" for his devilish plans.

END_OF_DOCUMENT_TOKEN_TO_BE_REPLACED

END_OF_DOCUMENT_TOKEN_TO_BE_REPLACED
We and our partners use cookies on this site to improve our service, perform analytics, personalize advertising, measure advertising performance, and remember website preferences.Ok