Home » Lifestyle » So would you leave your 16-year-old at home for a week?

So would you leave your 16-year-old at home for a week? 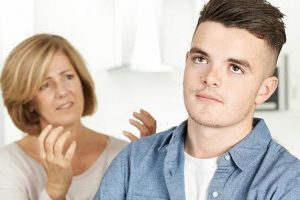 Would YOU leave your 16-year-old home alone for a week? Mother sparks debate after revealing her son is refusing to come on their family holiday – as some warn she could return to chaos

A British mother has sparked a furious debate over whether she is okay to leave her 16-year-old son for a week while she goes on holiday.

Taking to British parenting platform Mumsnet, the woman explained that her son will be 16 and a half next year – and doesn’t want to go on a family holiday.

The mother said she doesn’t want to leave him at home as she feels neglectful – but she thinks he will be fine to be home alone for the seven day period.

But while some users said he would be fine for a week alone, others warned she shouldn’t leave him, even if he really wanted it. 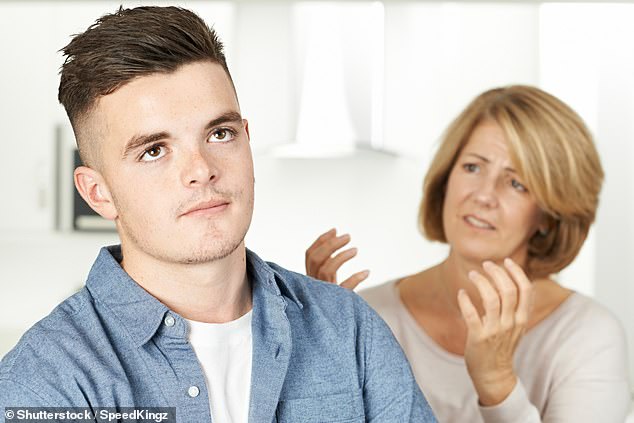 In the original post, the mum explained that the boy didn’t want to go on holiday with the family next year.

She said: ‘Dear son insists he doesn’t want to go on holiday with us next year. He’ll be 16 and a half.

‘I don’t want to leave him as I think it’s too young. He’s mature for 16 but doesn’t cook (younger child and dear husband have food allergies so the adults cook), he knows how to make oven food like pizza/nuggets etc so wouldn’t starve.

‘He’d be home alone as his sister will be at university and the last thing he wants is her coming back to ‘babysit’. They get along ok but he wants a week of just being by himself with nobody else home.’ 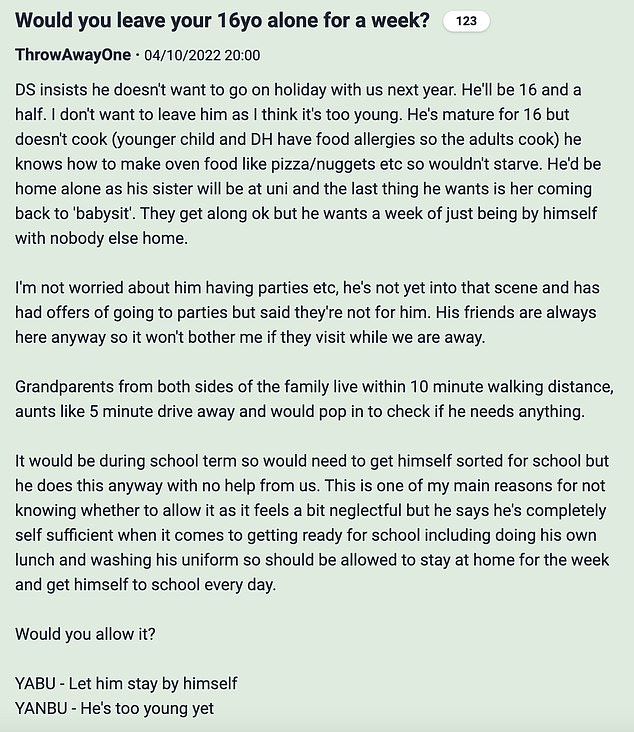 She continued: ‘I’m not worried about him having parties etc, he’s not yet into that scene and has had offers of going to parties but said they’re not for him. His friends are always here anyway so it won’t bother me if they visit while we are away.

‘Grandparents from both sides of the family live within 10 minute walking distance, aunts like 5 minute drive away and would pop in to check if he needs anything.’

She added: ‘It would be during school term so would need to get himself sorted for school but he does this anyway with no help from us.

‘This is one of my main reasons for not knowing whether to allow it as it feels a bit neglectful but he says he’s completely self sufficient when it comes to getting ready for school including doing his own lunch and washing his uniform so should be allowed to stay at home for the week and get himself to school every day.’

She asked the community if it was okay to leave him, or if she should force him to go with them.

Some said the boy was old enough to have a job, become a father and leave home – so of course the mother should leave him alone

One said: ‘He’s 16 not six,’ while another said they lived on their own at that age.

Another pointed out that he could be a father himself at that age, and that the mother should definitely leave him.

A fourth user said that while the holiday was in term time the boy should definitely stay at home and not go.

But others were more concerned, pointing out that although 16-year-olds can technically be fathers, leave home and get a job, most of them don’t. 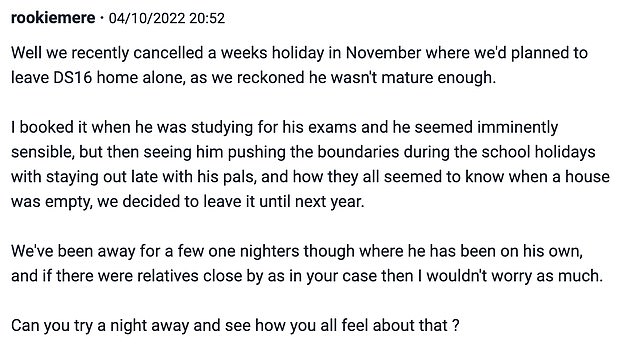 However others warned that they wouldn’t leave their 16-year-old alone, and that the parents should try one night away instead to see how it went

And they said that even if the boy was mature, that a week was too long and might end in disaster.

Others warned that he would likely have a party, or at the very least some friends over.

Some said that if the grandparents would check on him then it would be okay to go, but others didn’t think this was the case

The original woman explained how the grandparents could cook for the boy or call in to check on him if the boy wished.

She wrote how the boy would likely go there for meals.

And she added: ‘My dad would call in each evening on his nightly walk and my mum and dad have a spare bedroom if he decided after a few nights that he didn’t like being alone.’

This reassured some users who said this made a difference as it would ensure the boy was safe and having healthy meals.

One user however, who was left alone at 15, was insistent it should not happen.

They wrote: ‘I resent to this day that they went on holiday without me. Some horrible kids from school found out and kept coming round.

‘My grandparents lived nearby but I was scared to tell them. I wouldn’t give him the choice.’