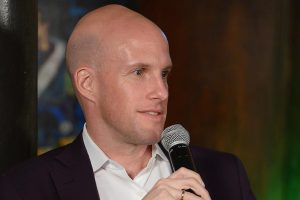 Grant Wahl, a celebrated sports journalist and soccer analyst for CBS Sports, died early Saturday morning while covering the World Cup in Qatar. He was 48.

According to the Los Angeles Times, Wahl collapsed in the media tribune during the World Cup Argentina-Netherlands quarterfinal game and was treated by paramedics for 30 minutes before he was taken to the hospital. He was pronounced dead on Saturday morning. The cause of death is unknown.

In a Substack post on Monday, Wahl wrote that he had been feeling sick and visited a hospital in Qatar, where they said he likely had bronchitis. “What had been a cold over the last 10 days turned into something more severe on the night of the USA-Netherlands game, and I could feel my upper chest take on a new level of pressure and discomfort,” Wahl wrote. “I didn’t have Covid (I test regularly here), but I went into the medical clinic at the main media center today, and they said I probably have bronchitis. They gave me a course of antibiotics and some heavy-duty cough syrup, and I’m already feeling a bit better just a few hours later. But still: No bueno.”

The U.S. Soccer Federation confirmed Wahl’s death in a statement posted to social media, writing: “The entire U.S. Soccer family is heartbroken to learn that we have lost Grant Wahl. Fans of soccer and journalism of the highest quality knew we could always count on Grant to deliver insightful and entertaining stories about our game, and its major protagonists: teams, players, coaches and the many personalities that make soccer unlike any sport.”

Wahl’s wife, Céline Gounder, quote tweeted U.S. Soccer’s post, saying that she is “so thankful for the support of my husband @GrantWahl ‘s soccer family & of so many friends who’ve reached out tonight. I’m in complete shock.”