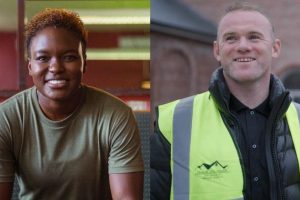 Both features will give viewers a glimpse into the life of two top athletes, offering interviews with their inner circle and examining the challenges they faced on the road to glory.

Adams, an undefeated WBO champion, double Olympic gold medalist and recipient of an OBE, has battled sexism, racism and homophobia over the course of her career. In 2020 she made history by becoming part of the first ever “Strictly Come Dancing” same-sex dancing couple.

“Lioness,” which is directed by Helena Coan (“Audrey”), includes interviews from Adams’ girlfriend Ella Baig as well as a variety of peers and competitors from the world of boxing. It is produced by Salon Pictures’ Nick Taussig and Annabel Wigoder and Rep Productions’ Laure Vaysse.

Meanwhile “Rooney,” which was directed by BAFTA winner Matt Smith (“Rio and Kate: Becoming A Stepfamily”), looks at the highs and lows of Rooney’s career as well as the scrutiny he faced in his personal life, with contributions from some of soccer’s most famous faces including David Beckham, Thierry Henry, Gary Neville and Sven-Göran Eriksson as well as wife Colleen and other friends and family.

Amazon Prime Video unveiled the docs on Tuesday with a Sport Showcase event in London which featured Q&As with both Rooney and Smith and Adams and Coan.

“I’ve dedicated my life to boxing and wanted to share my journey with my incredible fans, who have supported me every step of the way and kept me going through all the trials and tribulations I’ve been through over the years,” Adams said in a statement. “I hope this documentary will help inspire young people to realise that whatever adversities life might throw at you, you can overcome them. Sometimes it might feel as if the world is stacked against you, but through hard work, passion and determination you can achieve your dreams.”

Martin Bucklund, head of content at Prime Video U.K. and Nordics, said: “’Rooney’ is an honest and intimate documentary about one of the country’s most famous sports stars who has faced untold pressure from a very young age. Prime members will get to hear from Wayne himself on the events and moments that shaped who he was as a player and who he is as a man.”

The streaming giant has been increasingly investing in sports content of late, with “All or Nothing: Tottenham Hotspur,” “Sir Alex Ferguson: Never Give In” and “Andy Murray: Resurfacing” among its catalogue.

Among the live coverage on offer there is Premier League football matches, Autumn Nations Series international rugby union and ATP & WTA Tour tennis and US Open tennis, which it licenses exclusively. In September, when British teenager Emma Raducanu made it to the women’s singles final of the U.S. Open, Amazon Prime Video sub-licensed the coverage to public broadcaster Channel 4.

Check out trailers for “Lioness: The Nicola Adams Story” and “Rooney” below: