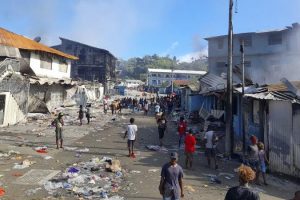 For aid workers in the Solomon Islands, the riots that have burnt down buildings and threatened to overthrow the government this week could not have come at a worse time.

Many of the protesters come from the most populous province Malaita, where people feel overlooked and claim resources are disproportionately directed to the capital. Many of them also opposed the Solomon Islands’ 2019 decision to switch its diplomatic allegiance from Taiwan to China, which is partly behind the unrest. But with shops burnt down and services shut, some people on the ground fear that the unrest will only worsen the inequality for communities far from the capital where basic goods are already hard to access and expensive. 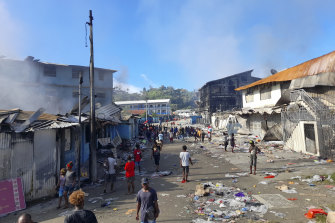 People walk through the looted streets of Chinatown in Honiara on Friday.Credit:AP

More than 100 Australian soldiers and police officers are now on the ground in the capital, Honiara, after devastating unrest was triggered by disputes over the country’s leadership and diplomatic switch from Taiwan to China.

Rose Everlyn Clough, a worker with aid agency Caritas, said the situation deteriorated even more on Friday, but she hoped the Australian soldiers and police officers could help the local police get things under control.

She said her local shop, commercial bank and hardware store had all been burned down, which would impact the delivery of aid throughout the region.

“It’s pretty scary,” she told The Sydney Morning Herald and The Age.

“The protests in the Solomon Islands will have devastating impacts for communities as they already face significant struggles accessing clean water, food and sanitation.

“Basic foods and basic goods – accessing it could be very expensive in the next couple of months.”

She said this was particularly concerning as cyclone season approached, saying it would be “harder to respond to any cyclones over the next few months”.

Ms Clough said the sight of Australian personnel had already made women and children in the community feel safer, but people also feared that they could bring in COVID-19 to a country that has largely kept the virus out.

“As an aid worker, the most important thing is to always make sure that people are safe and we can prevent violence as much as possible, because it is hard to build back after this kind of civil unrest and the damage it can do to the communities and families.”

While the riots have been caused by a multitude of factors, deep dissatisfaction with the country’s diplomatic switch to China has loomed large. Chinese businesses in Honiara have been targeted by the rioters.

The Prime Minister of the Solomon Islands, Manasseh Sogavare, on Friday blamed foreign powers for being behind the riots.

“These very countries that are now influencing Malaita [the main island of the nation] are the countries that don’t want ties with the People’s Republic of China,” Mr Sogavare told the ABC. 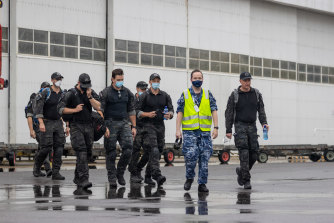 “And they are discouraging Solomon Islands to enter into diplomatic relations and to comply with international law.

“I don’t want to name names, we’ll leave it there, we know who they are.”

Considering the country’s strong diplomatic connection with Beijing over the past two years, the Australian government was quietly pleased it came to Canberra first for help.

Rory Medcalf, head of the National Security College at the Australian National University, said Australia would have agreed to the request for help from Prime Minister Sogavare regardless of the China factor as a geopolitical backdrop.

“I think it’s sensible for government to not refer openly to the China factor. But privately, of course, our security community acknowledges that geopolitics is now another overlay here,” he said.

“The fact that the Solomons’ Prime Minister who has been critical of Australia still recognises the reliability of Australia as a security partner is also a healthy sign.”

Professor Medcalf said it was important to note that Australian personnel would be protecting the safety and property of all nationalities, including from China.

“This is a tangible example of Australia being a good citizen in its neighbourhood. And it’s a reminder that there are things Australia can do that are in China’s interests,” he said.

“I don’t expect there to be any particular acknowledgement or praise of that out of Beijing. There doesn’t need to be – but I think privately, China will notice this, and the region and the world will notice this as well. So I think this is an opportunity for Australia to do the right thing as a good regional citizen.”

Professor Medcalf said China was not yet at the point of being a “security provider of first resort” in the Pacific, but it was realistic to imagine Beijing conducting evacuation operations in the Pacific in a future crisis.

“It’s not absurd to imagine that China would conduct an evacuation operation that could involve mission creep. You only need to look at the way this has occurred in other countries in the past.”