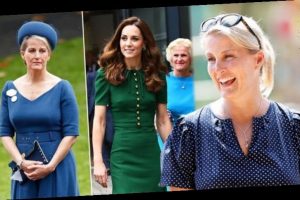 Sophie, Countess of Wessex is the daughter-in-law of the Queen and a senior member of the Royal Family. A body language expert revealed she could have inspired Kate Middleton by using a “formula” to succeed in the Royal Family.

Since then, they have had two children together, Lady Louise Windsor, 16, and James, Viscount Severn, 12.

Before she joined the Royal Family, Sophie had a long career in public relations.

The Countess became a full-time working royal after she tied the knot with the Queen’s youngest son.

However, her previous work may have helped her in her royal role, body language expert Judi James told Express.co.uk.

Sophie has often been considered one of the closest family members to the Queen which could be down to how she has handled royal life.

“When Sophie married Edward she was hailed as the new Diana,” Judi commented.

“But what followed looked like a masterclass in hunkering in as the soap-opera-free royal bride who managed to be a stabilising influence on her husband while keeping press and royal fan attention to a minimum.

“Sophie is also said to be a close ally of her mother-in-law the Queen and in terms of her body language she tends to blend some of the signals of the kind of laid-back calm and fun that we get from Zara Tindall with the stoic, deft formality of the Queen herself.”

Kate Middleton also took on a working royal role when she married Prince William in 2011.

Since then, she has become a prominent and popular member of the Royal Family.

The Duchess of Cambridge has thrown herself into her royal duties over the years and may have copied Sophie to achieve success, the expert said.

Judi continued: “Sophie’s formula does appear to have been copied by Kate too.

“This is because – so far – she has managed to tread the very fine line of creating interest that is positive but not unmanageable.”

Sophie and Kate have attended many events together in their senior royal roles.

Earlier this year, prior to lockdown, they were spotted at Buckingham Palace as Kate hosted a reception.

On such occasions, Sophie appears to watch out for the Duchess, showing why Kate might look to her for guidance.

Judi added: “Many of the poses of the two women together show Sophie face-checking Kate with quite strong bouts of watchful-looking eye contact to suggest she’s taking a semi-maternal approach.

“However, she also has raised brows and what’s called a ‘pinging’ smile that implies she wants to ensure Kate is enjoying herself.

“There is some mirroring when the two women walk together but it’s primarily Sophie projecting the stronger signals of relaxed confidence while Kate smiles happily at her side.”

END_OF_DOCUMENT_TOKEN_TO_BE_REPLACED

END_OF_DOCUMENT_TOKEN_TO_BE_REPLACED
We and our partners use cookies on this site to improve our service, perform analytics, personalize advertising, measure advertising performance, and remember website preferences.Ok