Sparkling water is making a splash

You could say seltzer is in his blood.

Correspondent Serena Altschul asked, “What’s really changed since your great-grandfather was doing this?”

“As far as the process? Nothing,” Gomberg replied.

Each vintage bottle is filled with just two things: New York City tap water, chilled to 42°, and a charge of carbon dioxide. 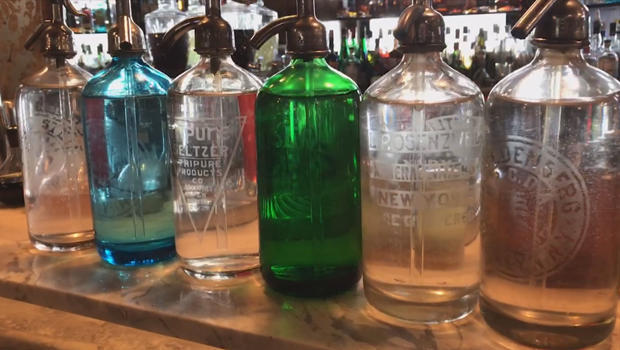 Gomberg doesn’t just make the stuff; he delivers it. And what’s crystal clear is, across America, this pressurized mix is having a moment.

But is it seltzer or sparkling water?  Melanie Hansche, an editor at Food and Wine Magazine, said, “I think they’re all variations on a theme. And I think ultimately, it’s just all bubbly water. To me, anything that’s water-based that has bubbles in it is just bubbly water.”

And bubbly water – whether with CO2 added or carbonated naturally – is booming.

“Sales of bubbly water, of sparkling water, have more or less tripled in the last ten years,” Hansche said. “And that can be really attributed to one big food trend, and that’s the trend towards health and wellness, and essentially the demonization of sugar in drinks.”

One of the biggest sellers is La Croix, but it’s a crowded market with many brands and flavors. Some are even spiked with alcohol.

For Barry Joseph, this is way more than a trend: “I like to say to people, ‘Welcome to the Age of Effervescence.'”

Joseph is an expert on the subject, and even wrote the book on it, “Seltzertopia.”

So, did someone invent seltzer? “We wouldn’t have seltzer today if it weren’t for Joseph Priestley,” said Joseph. “At the end of the 18th century, this religious leader in England [and] scientist on the side, was fascinated with how, when you hold CO2 over water, and you combine it together, that carbonation would stay in that water if you held it under pressure.”

“So, it’s water plus an experience,” said Altschul.

“That’s right. That experience of having the water enter their mouth and create this taste sensation that could be sometimes shocking, sometimes crisp, sometimes harsh, but always satisfying.”

“Some people will say, ‘I’m not a seltzer person, I’m a sparkling water girl.’ What does that mean?”

Altschul asked, “What would the world be without seltzer and sparkling water?”

“Much flatter!” he replied.