Spoilers: Finn and Elly kiss, Ned in gun fight and more in Neighbours 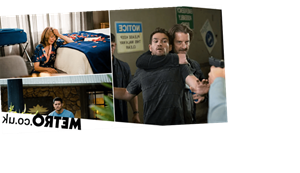 Nerves are running high in Neighbours this week as Ned (Ben Hall) is left staring down the barrel of a gun, Finn (Rob Mills) commits a betrayal, and Hendrix (Benny Turland) is shocked by a sudden death.

Ned is hell-bent on putting a stop to Zenin before he does something to hurt Yashvi (Olivia Junkeer), but his decision to go it alone lands him in a life-threatening situation.

Hendrix (Benny Turland) is left devastated by a shock death and it looks like Harlow (Jemma Donovan) is to blame).

Finn (Rob Mills) and Elly (Jodi Anasta) cross the line they’ve been so carefully tip-toeing around, what will this mean for poor Bea (Bonnie Anderson)?

Jane (Annie Jones) is left heartbroken and horrified when she finds out her online lover isn’t who he said he is. So who is he?

And a whole load of nudity is about to hit Erinsborough. Think Magic Mike, Neighbours stylie.

Here’s what’s ahead next week in Neighbours.

Ned is anxiously waiting for the police to do something to catch Zenin, but the wait is getting to him. So much so that when he overhears Yashvi on a suspicious phone call, he jumps to conclusions and suspects she’s working with Zenin. He decides to confront the dangerous crook himself, but he doesn’t bank on Zenin being armed and dangerous, and being surrounded by his cronies. And Zenin doesn’t bank on the police arriving to take him down. Backed into a corner, armed, and with nothing to lose, he takes Ned hostage and he’s prepared to do anything to fight for freedom. Is this it for Ned?

Hendrix is annoyed by Mark’s sudden return and decides to distract himself by turning his attentions to spending quality time with Clementine the cat. But the two of them keep getting in the way of Harlow and making her allergies flare up. She hates the cat and it causes tensions to rise between her and Hendrix.

Not long later devastating news hits the Willis’, Clementine is found dead. Did Harlow do this on purpose?

With Lucy back town Chloe is determined to prove herself, but Lucy is not impressed. And an email puts paid to Chloe’s hopes of a successful expo – are her plans for Princess Mary’s attendance dashed? After a recent successful PR move, Lucy wants Terese on board and offers her Chloe’s job. Terese is torn but Paul is delighted. Will Terese be the one to oust Chloe?

It’s Aster’s naming day and it’s turning into a disaster, both Aaron and Chloe can’t make it. Finn is also trying to stay away as he’s finding it too hard to cope with his feelings for Elly and his guilt over Bea. But despite trying to keep away, he finds himself alone with Elly and when he’s gripped by a sudden flash of a memory, he kisses her. Whoops, that’s the line finally crossed and both are left absolutely shocked by his actions. Elly flees. Later she returns and they agree they need to stay away from each other to bury what happened, Elly is clearly a trigger for Finn. But now Finn’s guilt is worse than ever, will he confess all to Bea?

After her shock discovery about her internet lover, Jane heads to the school to follow up on a suspicion, but she is rumbled by Susan digging through the files. She manages to talk her way out of it, saying she was just looking through the files to brush up on the students and staff she’s worked with before so that she’s ready to work with them again, and Susan buys it but remains suspicious. Jane and Dipi start to investigate ‘Richard’ and their search starts to get risky.

Jane finds a poem that’s fallen out of student Richie’s schoolbag and she begins to wonder if she’s found her ‘Richard’. She questions the schoolboy about his personal life and when he starts to grow uncomfortable she puts him on detention so they can spend more time together and she can find out more. What will Jane discover? Is she taking things too far?

6. Get ready for a naked brunch

An interesting invitation lands in the postboxes of Ramsay Street – to the Waterhole’s Naked Brunch. Toadie takes an interest and buys a ticket, and so do Aaron and Kyle. Karl is also keen to get in on the action. Shane meanwhile knows Roxy is behind it and reminds her she doesn’t have permission for this but with ticket sales through the roof she’s pretty sure she can pull this off. What the heck has she got herself into? Are we about to see half of Ramsay Street in the nuddy?

END_OF_DOCUMENT_TOKEN_TO_BE_REPLACED

END_OF_DOCUMENT_TOKEN_TO_BE_REPLACED
We and our partners use cookies on this site to improve our service, perform analytics, personalize advertising, measure advertising performance, and remember website preferences.Ok