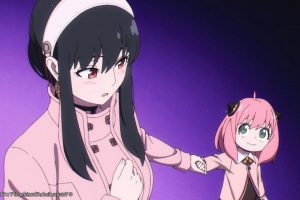 Spy x Family has brought the Forger family together at last, and the anime’s latest chapter sees Yor moving in with Loid and Anya. Unpacking goes smoothly, but the preparations for Anya’s admissions interview are less impressive. Twilight spends most of Spy x Family Episode 3 wondering how he’ll move forward with Operation Strix. However, a surprising turn of events leads him to realize his new family may still stand a chance.

Spy x Family Episode 3 opens with Yor moving into Loid and Anya’s apartment, and she hits it off with both of them almost immediately. However, it’s not the two of them she has to impress. The Forger family needs to prove their social standing if they hope to get Anya into Eden Academy. And Twilight’s entire mission is riding on her acceptance interview.

Unfortunately, Anya and Yor need a lot of practice to come off as “cultured.” While Anya’s a bit too forward in her answers, Yor spends most of their practice interview alluding to her career as an assassin. Viewers will no doubt find their awkward responses hilarious. However, Twilight is less than thrilled by the situation.

Eventually, he gives up on practicing altogether and decides they should get out for the day. Their family outing doesn’t play out how he imagines.

With things looking bleak on the interview front, the Forgers decide to have a family outing in Spy x Family Episode 3. Twilight takes Yor and Anya to cultural locations like the theater and museum, hoping they’ll have something to talk about when they enter Eden Academy.

Of course, the duo continues with their antics — with Anya pointing out a statue’s “boobies” and Yor admiring the knives on their dinner table. By the time their day is over, Twilight starts spiraling. It’s clear he doesn’t like depending on other people, especially not when it comes to his work.

Noticing his stress, Yor suggests the three of them get some fresh air. They head to a park, where they witness a man stealing an old lady’s purse. Surprisingly, it’s this event that allows the episode to end on a more positive note.

When Yor sees a purse-snatcher robbing an old lady, her assassin instincts immediately kick in. She attempts to catch the criminal, then comforts the old woman. While she offers support, Anya and Loid track the guy down and get the purse back. Overall, this moment from Spy x Family Episode 3 highlights how well the three characters work together.

Pairing Yor and Loid’s instincts with Anya’s telepathy is sure to be useful down the line — especially if they ever learn each other’s secrets. And when the old woman remarks that they’re a “lovely family,” Twilight realizes it’s not just their skills that make them a decent match. It seems they fit together as a family after all, something that gives him hope ahead of the interview.

Only time will tell if it’s enough to get Operation Strix off the ground. Hopefully, the leaders at Eden Academy see the Forgers in the same light as the woman they helped this week.

New episodes of Spy x Family debut on Crunchyroll and Hulu every Saturday.