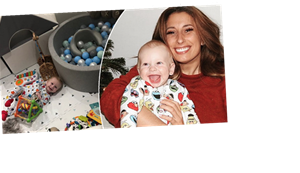 Anyone who has children has probably visited the real life horror show that is a soft play area. The screaming kids, the terrible coffee and the garish lights. But we tolerate them because they are a safe place for your little ones to play.

However, Stacey Solomon has had another brilliant idea, bringing the concept of the sort play area into her own home for her adorable baby son Rex, who she shares with her partner, Dancing On Ice star Joe Swash.

Stacey's living room has been covered with foam tiles over the hard wood floors, making it very safe for the little one to roam around on. She has also bought an amazing little grey ball pit from The Playtime Company which is filled with grey and blue balls.

The sweet little ball pit is made with soft polyurethane foam and costs £80, which seems to be worth every penny when it comes to Rex who can’t get enough of his personal play area. The ball pit even has a little seat in the middle for her youngest son and the blue balls have his name written on them.

The Loose Women star ordered a soft play area from the company in matching grey and white that she hopes will keep him entertained for a few years. On Instagram she wrote: "I ordered a soft play for Rex now that he's moving around. I'm going to use it as a little bumper system for now then it'll be a climbing, den building adventure as he gets a bit older”.

After posting her now-trademark ‘tap to tidy’ story format, she showed fans the whole area assembled complete with triangular, square and oblong barriers, accompanied by the caption: "Sooo excited for him to wake up and play."

The entire soft play package that Rex has to enjoy costs £270 and includes a step and slide set and an 11-piece castle block set. If Stacey’s choice is not to your fancy it also comes in a gorgeous a grey, white and deep pink colour way.

Sharing an image of Rex to their Instagram The Playtime Company thanked the 31 year old mother writing: "Little Rex loving life with his new soft play blocks. Thanks so much @staceysolomon for sharing it makes such a difference to a small family run business like mine so I’m forever grateful for exposure like this."