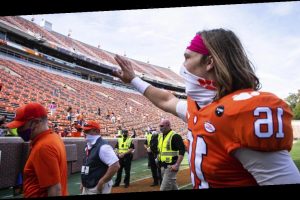 Lawrence will miss Saturday’s game and, while his status for next week’s showdown with No. 4 Notre Dame is unknown, it appears possible that he could be cleared. 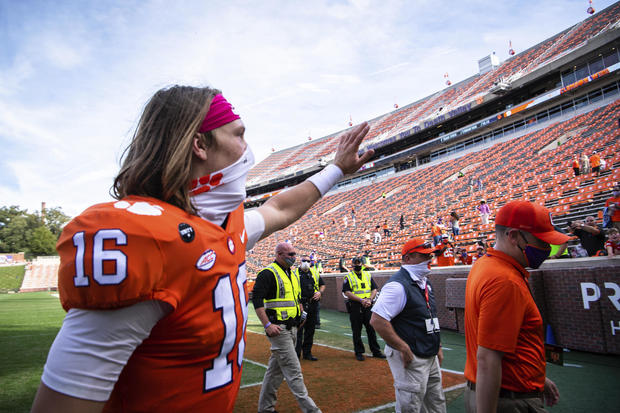 “I have tested positive for COVID-19, and my symptoms have been relatively mild while I’m following the protocol from Clemson and the ACC. The only thing that hurts is missing an opportunity to be with my teammates this weekend and play the game I love,” Lawrence said in a statement. “I hate that I can’t be there, but I’ll be watching from isolation and pulling for our guys while I wait for the opportunity to rejoin the team.”

According to ACC guidelines, athletes who test positive must isolate “for at least 10 days from the onset of symptoms/positive test.”

Until Lawrence returns, the Tigers will likely turn to true freshman DJ Uiagalelei, a five-star prospect from the 2020 recruiting class. Uiagalelei has completed 12-of-19 passes for 102 yards in backup duty this season.

“Trevor has authorized us this evening to announce that he has tested positive for COVID-19 and is now in isolation,” Swinney said in a statement. “He is doing well with mild symptoms but will not be available for this week’s game against Boston College. While we certainly will miss Trevor, this is an opportunity for other guys to step up and we’re excited about competing against a very good BC team on Saturday.”

This story first appeared on CBSSports.com.

END_OF_DOCUMENT_TOKEN_TO_BE_REPLACED

END_OF_DOCUMENT_TOKEN_TO_BE_REPLACED
We and our partners use cookies on this site to improve our service, perform analytics, personalize advertising, measure advertising performance, and remember website preferences.Ok