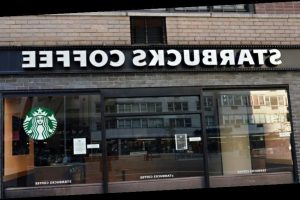 In an internal memo obtained by BuzzFeed, Starbucks management told employees that Black Lives Matter merch—whether it be buttons, T-shirts, or pins—does not adhere to their dress code, and as such, they may not wear such items to work. Their reasoning? There are “agitators who misconstrue the fundamental principles” of the BLM movement and the chain believes indicating support for the organization might incite violence in stores.

Per the site, the bulletin came down after several Starbucks store managers reached out to company leadership on behalf of their employees who reportedly were asking if they could wear BLM pins to work. And while the memo notes “partners are not permitted to wear buttons or pins that advocate a political, religious, or personal issue,” BuzzFeed explains “nearly every employee with whom [they] spoke pointed out that the company allowed workers to wear accessories supporting marriage equality and LGBTQ rights, even giving them pins and Gay Pride shirts, since June is Pride Month.” Black partners have the option of wearing a shirt from Starbucks’ Black Partner Network, which was created in an effort to “[continue] conversation around the African diaspora.”

Backlash following BuzzFeed’s report was swift, with many on Twitter noting the chain’s history of dealing with racist incidents in their stores (as well as their statements in support of the movement issued on June 1 and June 4). At the time of this post, #BoycottStarbucks was trending on Twitter in the United States.

As we always thought, they are only about #BlackLivesMatter when it’s convenient. https://t.co/xSepbY0scp

Despite this post on June 4, Starbucks stated in an internal memo that Black Lives Matter attire was prohibited due to its dress code policy. But Starbucks not only exempts LGBTQ buttons and attire, it hands them out. #BoycottStarbucks https://t.co/KTi74mtGnZ pic.twitter.com/Zzpa7xwUaw

I guess Starbucks’ racial bias training from a couple of years ago wasn’t as thorough as it needed to be. pic.twitter.com/Zcomt1qGvn

When contacted for a statement, Starbucks provided to the following to the Delish:

You can read BuzzFeed’s report in full here.