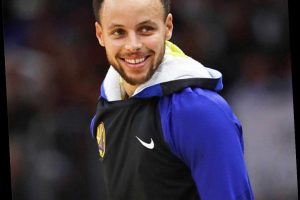 Stephen Curry gave two students the surprise of a lifetime.

Student-basketball players from St. Benedict's Preparatory High School—C.J. Wilcher and Dani Diarra—from the new Quibi docu-series Benedict Men chatted with Kelly Clarkson about the hardships they've had to overcome as individuals and as a team.

During The Kelly Clarkson Show appearance, which aired on Sept. 30, the two students were surprised by a virtual visit from the show's executive producer, Curry. The Golden Warrior shared what drew him to the story of the St. Benedict student athletes.

"Basketball teaches us all so much about ourselves, about our teammates, our coaches, and about life. And I think this documentary is so raw because it meets them where they are in their journey," he said. "It takes you through the things that are going on in their head and what's important to them in the moment and how they deal with success and failure."

"I love when people have that dream and speak it and proclaim it and own the journey," said Stephen. "The best advice is that you have to embrace the fact that the work only gets harder and harder and harder with every level that you get to because the talent—it narrows. It's the thinnest of margins that can change."

He continued, "You making it to that level and sticking to the NBA or not. You have to control the things that you can control at the end of the day."

The Biggest Bombshells from The Meaning of Mariah Carey

Outside of the hard work, he ended his knowledge drop with, "Don't forget to have fun because that's what basketball is all about. That's what should be the most consistent thing every time you set foot on the floor."

END_OF_DOCUMENT_TOKEN_TO_BE_REPLACED

END_OF_DOCUMENT_TOKEN_TO_BE_REPLACED
We and our partners use cookies on this site to improve our service, perform analytics, personalize advertising, measure advertising performance, and remember website preferences.Ok