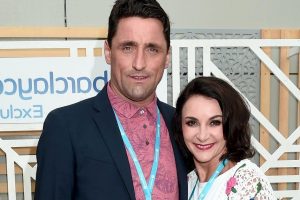 Shirley Ballas is set to make a welcome return to our TV screens on Saturday 24 September, with the 2022 series of Strictly Come Dancing beginning on BBC One.

The 62 year old will be returning to her role as head judge, with Anton Du Beke, Motsi Mabuse and Craig Revel Horwood making up the rest of judging panel.

Shirley first joined the BBC show back in 2017, replacing Len Goodman as head judge, and has gone on to become a firm favourite among Strictly fans, thanks to her impeccable dance skills and knowledge.

The star's boyfriend, actor Daniel Taylor, 48, is also a trained dancer and the pair appear to be as loved-up as ever after first falling for each other back in 2019.

Daniel, also known as Danny, is an actor who is best known for his theatre roles and a trained dancer, specialising in ballroom, tap, and waltz.

He's also appeared in TV shows such as Brookside and The Bill and released his debut album, The Party Is Over, in 2015.

Daniel, who shares a son with his ex-girlfriend Sharon Byatt, met Shirley when they were both starring in a Christmas production of Jack and The Beanstalk in 2018, and in January 2019 they confirmed their romance.

Shirley previously spoke of meeting her new beau on Loose Women, saying: "We met on panto as friends. It didn’t really take off until March… for him. I fell in love way before… I think for me it was first sight.

“He was going through a difficult time in his relationship. We did become friends and then probably in about February I said, ‘I love you Danny’ and he said, ‘I know’. It took a while.”

She previously branded her romance with Danny life-changing and gushed over the actor in an interview with Prima magazine.

“My relationship with Danny has changed my life,” she said.

“He’s very different to anyone I’ve been with before. First of all, he’s 6ft 1in, he’s the tallest man I’ve ever dated, and I love his jet black hair.

“He’s also very kind and very caring – he’s always there for me. I hope he’ll propose one day, but he’s never married and I think he’s a bit nervous about it, so we’ll see. Come on, Danny!”

Before falling in love Danny, Shirley was married twice with the dancer first walking down the aisle when she was just 18 years old.

In 1980, she wed professional dancer Sammy Stopford, but the pair's marriage was short-lived and after five years they called it quits. The pair still remain close pals.

In 1985, Shirley tied the knot for a second time with former ballroom dancer Corky Ballas. The pair competed in various dance competitions together, and welcomed a son, Mark, in 1986, before divorcing in 2007.