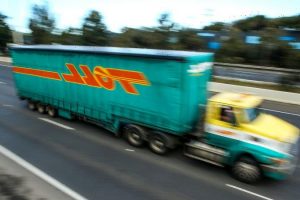 Food and fuel deliveries around the nation could be disrupted for 24 hours on Friday as the transport union and logistics giant Toll Group point the finger blaming each other for a planned strike.

About 7000 workers at the country’s largest road freight company will go on strike after talks between the two sides on Monday failed to resolve disputes over wage rates, overtime, and contractors in a proposed new enterprise agreement. 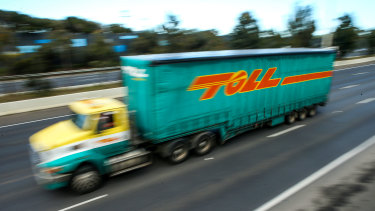 Toll Group faces a strike on Friday from thousands of its workers.Credit:Pat Scala

But in a statement, Toll said its workers, who earn an average of about $95,000 a year and receive superannuation of 14.75 per cent, had the best pay deal in the industry and would continue to.

Toll’s global express division president Alan Beacham argued the industrial action would only benefit the union. “Threatening industrial action at a time when our country is in the middle of a global pandemic is playing politics with people’s lives and jobs,” Mr Beacham said.

He said Toll was used to working through difficult conditions, including fires and floods. “We can assure customers their goods will be transported during any potential industrial action,” Mr Beacham said.

Australia’s industrial laws only permit strikes after a vote of workers, which in Toll’s case saw 94 per cent support strikes. But they can be stopped by the Fair Work Commission where they cause significant harm to a third party, which could include people and businesses waiting on Toll deliveries.

Companies like Amazon and Uber loom in the background of the dispute because they operate in the transport industry but their drivers are independent contractors, which means they do not have a minimum wage or the right to go on strike without risk of being fired.

However, both companies have pointed to the flexibility that contractors have to define their own working hours around other commitments such as childcare to defend their business models, backed by survey data.

In a veiled reference to the tech giants, Toll’s statement asked “why aren’t the TWU going after the bottom of the sector to raise the standards there?” It said that was where “real change needs to take place”.

But the union has been a dogged campaigner in that area, especially against Uber.