Home » Lifestyle » Strong Women: Surfing taught me how to fail – and come back stronger

Strong Women: Surfing taught me how to fail – and come back stronger 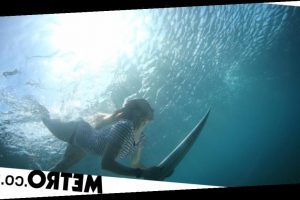 She has the unique kind of determination and work ethic that you only find in world-class athletes, and her six national gold medals speak volumes to this.

But winning isn’t the only experience of being an elite athlete, and with the highs come the crushing lows.

But to Lucy, the lows are more than worth it. Surfing is her life, and with every challenge, setback or disappointment, she uses that to learn and come back stronger. She says her passion for the sport is what drives her forward.

‘I was always at the after school sports clubs, having a crack at everything, and I love the thought of learning new skills. Fitness is a massive part of my life – I’ve always enjoyed running, and staying fit is absolutely key in surfing when you’re competing.

‘With surfing, I love the fact that every day is different. The conditions are always changing and every wave that you catch will never be the same.

‘To excel in surfing you have to adapt all the time and in that sense, I guess it never gets boring. When I first tried it, it was incredibly tough, but that hardship now makes it feel like such a big achievement.

‘I know some people can make it look easy but it takes many years of practice.’

Lucy started surfing when she was just 10 years old, with her dad and brother – and she instantly loved anything to do with the water.

‘During my teenage years, I was running and surfing at the same time whilst also training to be a lifeguard,’ she says.

Before turning professional, Lucy worked several jobs for years to fit around her training. At times she worked 16-hour days through the summer, teaching in surf school from 9-5, before a bar shift until 1 am.

She would be exhausted by the end of the summer, but it meant she could get consistent waves and train through the winter.

She would spend every penny she earned to fund competing and training, she even had to fund her own way to the World Games in Japan.

‘It was a pretty chaotic time, especially during my GCSEs and A-levels as I was competing too,’ says Lucy. ‘The sport provided me with a really good balance so I’m thankful for that.’

Lucy says one of the biggest challenges she has faced in sport was moving from British level championships to international level.

‘It’s a big leap and getting to grips with that can be really challenging,’ she explains.

‘I’ve faced a fair bit of disappointment finding that out – there were times where you feel so close to making it and then you can get brought back down to earth quite quickly.

‘I think the key to coping with setbacks is learning from your mistakes and thinking that failure isn’t actually a bad thing.’

In fact, Lucy views failure as a crucial part of the process. It spurs her on to do better and allows her the breathing space to analyse her performance and mind-set.

‘Failing can give you a chance to step back, reassess and go at it again,’ Lucy tells us.

‘When you don’t succeed at something, it’s a lot easier to look at where you went wrong and how you can improve – I like to think this advice can relate to almost anything in everyday life in whatever profession. I’m a firm believer that through failure, you can come back much stronger.’

Lucy’s dream has always been to compete in the Olympics. She actually came close to taking part as a middle-distance runner before injury forced her to give it up.

‘Getting injured isn’t easy for anyone,’ says Lucy. ‘I was running and surfing at the same time and was close to getting picked for major competitions as a runner before injuries kicked in.

‘It was a blow mentally, but sometimes it can be quite good in that it changes your focus and outlook on everything.

‘It allowed me to put more time into things I wasn’t doing before, and it has made me the person I am today.’

Lucy’s dream to make it to the Olympics came tantalisingly close again this year as she was selected to compete, but lockdown has meant the additional challenge of having very limited surfing training.

‘Of course it has been frustrating, and it puts everything from training to competing on hold,’ she says. ‘I spent most of the winter in Australia just to get ready for the competition season, but now everything is off for the foreseeable future so that has been tough.

‘Not having a time-frame on when we return has been one of the biggest challenges.

‘Having said that, it has given me a chance to put some time into other focuses. It has been really nice to help my family build their dream garden and I’ve been doing things that I’ve never had the time to – be it slow morning coffees or baking. So yes, it has been hard, but I have taken positives from it.’

Lucy says that she has been lucky in her attitude towards health and fitness because she happened to love running growing up. It was never something she had to force.

‘During my teenage years, when people go through problems, I was always found running helped me with a clear head,’ she says.

‘Even at school, fitness and sport helped me distract myself from revision and studying for my exams.

‘I would definitely recommend it, if people have the access. I would also recommend sitting out on the ocean waiting for waves – it can be really relaxing and calming on the mind.’

Growing up, Lucy realised just how much sport can teach people. She believes sport and fitness can be an invaluable tool kids – especially in teaching skills like teamwork and sharing responsibility.

‘I’ve also learned through difficult periods that not everything is under your control, especially when it comes to surfing,’ she adds.

‘Accepting that, and only trying to control what you can has helped my mindset – I guess a lot of that can be applied to our current situation and everyday life.’

Lucy Campbell is a brand ambassador of dryrobe, producers of the world’s most advanced change robe.

Are you a woman redefining what it means to be strong?