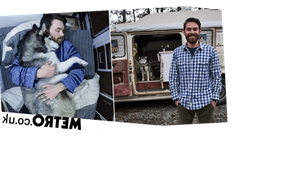 A canny student saved $18,000 (£14,500) after he moved out of his expensive apartment and into a van with his beloved husky dog. Michael Hanes, 31, now lives, eats and sleeps with his dog Scarlett in a Ford camper van.

Acupuncture graduate Michael, from Kamloops in British Columbia, Canada, has been living in the wild on four wheels with Scarlett for 18 months after deciding he no longer wanted to pay thousands a year for pricey college accommodation.

Determined to save that money, he packed his bags, moved out of his cozy flat in Victoria, and spent $9000 of his savings on a 1978 Ford van, and has called it home ever since.

Michael, who is single, said: ‘I was renting a flat on my own but I just found it too expensive and I was unable to sustain the lifestyle I wanted. It was costing my more than $1000 just to pay to live, and I wasn’t happy like that.

‘I spent quite a lot of my savings on the van so I was very nervous, moving out of the flat and into the van was one of the scariest things I have done. But we have had so many amazing adventures together and Scarlett has been the best partner in crime for me.

‘We have done everything together and I wouldn’t have been able to do this without her. Adopting to van life was actually very easy and to be honest, I think I like it more than I should.

‘The van feels like home for me now, and I don’t see myself leaving the van anytime soon.’

Michael was keen to try and improve his quality of life and save some cash. But he was unsure of how to do so – until a male pal told him about his camper van, and how much he enjoyed living in it. At the time Michael was shelling out $1000 a month on rent, plus bills and student loan repayments, and he said his friend’s life on four wheels sounded like the perfect way to save bags of money.

With the facilities to cook, shower, sleep and eat in the back of his van, Michael estimates that his mobile home has saved him $18,000 since early 2019.

Michael also credits being away from the buzzing social scene close to Pacific Rim College campus , where he studied, helped him focus on his studies and pass his exams. He graduated successfully in April and has said being away from the tempting campus social life positively impacted the quality of his work.

Michael said: ‘My friend told me how good it was and how much freedom he had, it sounded pretty awesome and I felt it was achievable for me.

‘I had some savings to spend on a van but realized I wouldn’t be able to convert a regular van into a home, so had to find a ready-made camper van.

‘The one I have is a 1978 Ford and it came with everything I need, running water, a bed, electricity, and a mini kitchen. I gave my landlord a month’s notice on the apartment and I have called the van my home for 18 months now.’

Michael has said living in the van has injected his life with a sense of ‘adventure’, and whilst for the most part he has lived out in the wild, Michael has made daily trips back to the city for visits to the gym and to college classes.

Michael and Scarlett, who he adopted at nine weeks old, have spent the last year and a half touring the scenic Victoria region, with the pair enjoying nothing more than parking up somewhere secluded to spend a peaceful night in the wilderness.

He said: ‘We have lived in the area surrounding Victoria and we have had some great adventures together. It has felt liberating to be able to move around as we like and pitch up where we want.

‘We have spent a lot of time in the mountains and we just pitch up in some real secluded spots. I shower, cook for us both and sleep in here, it really does feel like home.’

Michael plans to spend the rest of the summer traveling around British Columbia with Scarlett, before returning to the Victoria area in the fall for work placements. He said he will get his license to practice acupuncture professionally in October, and plans to continue living on four wheels.

Michael said: ‘It’s definitely the best thing I have ever done.

‘I find myself at a bit of a cross roads now and I can honestly say I don’t want to leave the fan at all yet.

‘Having Scarlett here with me has made it more than bearable. My mental state would have been seriously effected if I didn’t have her with me.’

Do you have a feel-good news story to share?

If you have overcome adversity to achieve something great or perhaps experienced something amazing, then we’d love to hear from you.