He opens the door of the hotel suite naked. This is the first surprise but certainly not the last. There's an atmosphere of uneasy intimacy. If he has already taken his clothes off what will he do next? How much more immersive can Biladurang get? A lot, as it turns out. The audience, hotel guests for the evening, are handed a bathrobe and a glass of champagne. We are about to have a one-night stand. And Joel Bray has had plenty of those, telling us about his seamy experiences of "drugs, sex and cigarettes". The room is strewn with the evidence: the unmade bed, piles of clothes, empty glasses.

For the next hour he will lay himself bare, literally and metaphorically, using his dancer's physicality, poetic monologues, brutal honesty and disarming humour to tell the story of his struggle for identity. Woven through Biladurang, an autobiographical dance/theatre piece that Bray will perform at the Sydney Festival, is the Wiradjuri story of the Biladurang, (the platypus) a creature that is part duck, part water-rat and rejected by its mother's tribe. This is a story that Bray says resonates with him as he has had to negotiate his own heritage. At one moment, wrought with anxiety, he has a bubble bath, assuming the foetal position before casually asking someone to roll him a cigarette. The 20 hotel guests, who spend the hour-long show as voyeurs, is by this point complicit in the intimacy. Our subversive new friend – who offers hand massages – is turning out to have a kind heart. 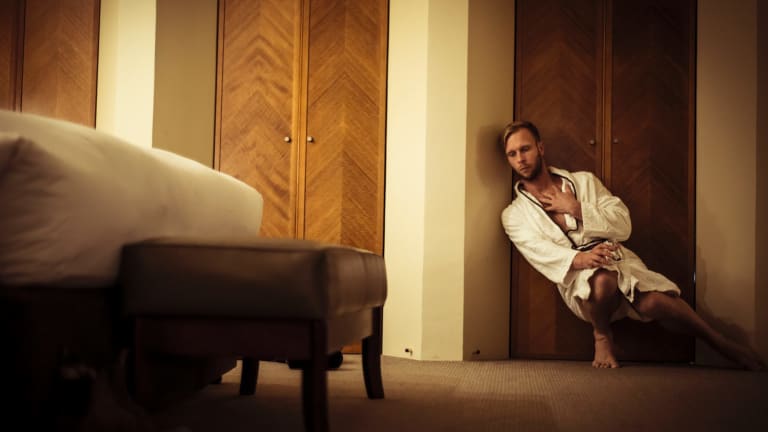 Joel Bray’s Biladurang is an autobiographical dance/theatre piece that is staged in a hotel room.Credit:Pippa Samaya

Sitting by the pool at The Johnson hotel in Brisbane the next day, Bray, 37, has a surprisingly sunny personality in contrast to the rawness on display in Biladurang. .

Bray's father is Wiradjuri​, his mother an evangelical Pentecostal Christian. They met at university and divorced when Bray was two. "We went to church three times a week and weren't allowed to watch The Simpsons," he says. Bray spent the summer holidays with his father, who lived in the foothills of Mt Warning, where he "would run around naked covered in mud".

"We were like ferals for six weeks. In hindsight it was actually a really post-modern upbringing," he says.

At high school, Bray struggled understanding his Christianity in relation to men. In his performance he speaks of looking at a a pornographic magazine, feeling "guilt and disgust", chopping it up and throwing it in the bin, then getting it out and sticking it back together.

Everything changed when he started studying arts and law at the University of Sydney. "I didn't go to classes very often. There was too much student activism," he says. Three months after he started university he returned to his local church and had a little chat with God. "I got this calmness, walked out and never went back. It was one of the clearest decisions I have ever made," Bray says.

He discovered his true passion when he went to NAISDA (National Aboriginal Islander Skills Development Association) Dance College on the Central Coast of NSW to study. "Not because I wanted to dance but because I wanted to be in a black community and figure out who I was as an Aboriginal man. Then I fell in love with dance," Bray says. The love came during his first class. "I went 'yes' this is what I want to do for the rest of my life. It is like when I am not performing the world is slightly blurry. And then when I step onto the stage, everything becomes sharp, I feel calm and most at home."

Bray then moved to the Western Australian Academy of Performing Arts. At 20, he was late to start a professional career as a dancer. "I had fire in my belly," he says. "I would turn up before the janitors and be stretching on the grass outside. They had to kick me out of the studios at night."

After he graduated, he went to France "with not nearly enough money, maxed out credit cards, living on one baguette a day" and finally got a job with a small dance company in a village in Portugal. The company was "horrible" but he met his Israeli partner there and would spend 10 years in Israel working as a dancer including for the Fresco Dance Company. When Bray and his partner separated, Bray lost his spousal visa and had to leave Tel Aviv. He spent time commuting between Europe and Australia before returning to Melbourne, where he has been working as a choreographer for the dance company Chunky Move. He created Biladurang in 2017.

"I had this strange period where I was floating around between all the continents and spending a lot of time in hotel rooms. And so I just started writing because I was on my own a lot and didn't have anyone to talk to. There was a loneliness to it and also a kind of decision making about where to be. I started to read it aloud to myself and I realised it was performance writing," Bray says.

In Biladurang, Bray says his most private thoughts out loud. It is confronting but familiar. "I want to say those things that we barely admit to ourselves and give permission to my audience to say actually we all have these worries about our behaviour, about where we are going. If we acknowledge that we all have those things we will stress a whole lot less," he says

So, does he really have all those one-night stands? "Yep, I am just a big old slut."

Biladurang will be at the Sydney Festival, January 11-20.