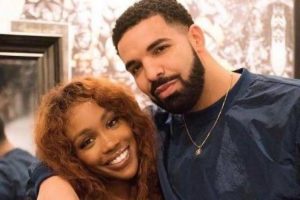 American singer. Born in St. Louis, Missouri, she began making music in the early 2010s, releasing two extended plays before signing with the hip hop record label Top Dawg Entertainment, through which she released Z, her third EP and first retail release SZA and Canadian rapper and singer. An influential figure in contemporary popular music, Drake has been credited for popularizing singing and R&B sensibilities in hip hop Drake hinted that they dated in his and 21 Savage’s 2021 single “Mr. Right Now,” SZA has confirmed the news in a new interview.

According to Complex, While speaking with Audacy, the R&B star shared her reaction to hearing Drake’s line referring to their past relationship on the Savage Mode II track. “Said she wanna fuck to some SZA, wait/’Cause I used to date SZA back in ’08,” Drake raps on the song.

“In a strange way, I was like, ‘Did they know?’” SZA shared. “But they didn’t ask me to be in it. Nobody said anything.”

“I feel like Drake has a Regina George quality to him where it’s just kind of like, ‘Have you or anyone you know been personally victimized?’” she said. “He’s like a cool kid, you know. When you’re the popular kid in school, it’s entertaining. It’s entertaining, but you sometimes are taking losses in the midst of that entertainment. The honesty, I respect that. But I definitely laughed real hard…I cackled.”

Elsewhere in the interview, SZA maintained that she and Drake have “always been cool” despite their past dating history.

“We’re cool, we’ve always been cool. It’s never been weird. It’s never come completely out of the blue,” said SZA, who was given a heads up by Drake before “Mr. Right Now” dropped.

She added, “Anytime he’s ever mentioned me, it’s always been positive. He’s never said anything negative about me. I’m grateful for that and I think highly of him, and I think it’s really weird that as all these years went past, I am an artist now and I wasn’t then and he’s King Drake.”