Taylor Swift, Chris Evans and More A-Listers Break Down Why They're Voting 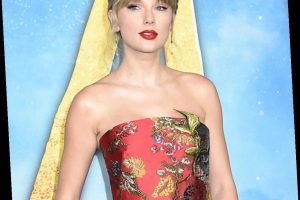 Taylor Swift, Chris Evans, Bella Hadid and more stars share why they're voting in the upcoming election this November, and why you should too.

Election Day 2020 is right around the corner, and Chris Evans, Taylor Swift and more stars are ready to cast their votes.

Ahead of the Nov. 3 voting deadline, the A-listers are telling V Magazine why it's important than ever to participate in this election, whether it be local or nationwide.

For model Bella Hadid, she's speaking out about this important issue, because she wants everyone to know that their actions and ballots matter. She says, "Every vote really does count, and will contribute to seeing the outcome that you want to see in this next election."

And T. Swift says she's voting with the hope that the nation can start the "healing process" following years of racial injustices and political unrest. The artist states, "The only way we can begin to make things better is to choose leaders who are willing to face these issues and find ways to work through them."

This idea of unity and equality is voiced by all of the stars, including Olympian Megan Rapinoe, Janelle Monáe, Jennifer Lawrence and many more.

To learn why they're casting their ballot, continue reading below.

"Voting is a right we have as a part of a democracy. It is a freedom that many people in this world do not have, so being able to use our vote to help individuals and communities across America is a right we should all exercise," Bella shares, adding that she hopes to represent the "young generation" in the voting booth. "We all have a lot to say and want to be as vocal as possible—[voting] is how we can put our thoughts into action and see the changes we want to see."

For the Marvel star, he believes the younger generations "really are the future," and will make the world a better place. "I think we are on the cusp of a really motivated, driven generation of young people who are very awake and connected," Chris explains. "Now more than ever, young people are involved in shaping the political and social landscape. It really is like a potter's wheel and these young voices are molding our future."

Halsey will not accept any excuses, explaining that it's "more important" than ever to participate in this year's election. "There are millions of lives at risk, and if it's not millions of lives, then it's the safety and comfort of millions of lives," she states. "I have seen my fans line up outside of a venue for three days to get into a concert, and I've seen people line up outside of a GameStop because a new Call of Duty game is dropping. They should be doing the exact same thing at a polling center. It's like, 'Go get in line!'"

The artist's reasons for participating in this election are simple. He says, "I'm voting because I haven't been happy with the leadership. I don't feel as though I'm being represented or that I'm being listened to, or that the Black community is being represented or listened to at large. Things need to change, starting with how we treat the people of color in the nation and how we're allowing these systems of racism to still exist and for us to still follow them. That's the main thing that keeps me up at night."

The Antebellum star is hoping to prevent voter suppression and secure equal rights for the Black community with her vote. She shares, "I will be voting against racist policies and tactics that have continued to oppress and traumatize Black people. Even I have been gerrymandered, just before the election of [Atlanta Mayor] Keisha Lance Bottoms, my county was redistricted, meaning her name was not on my ballot. After the election, my county went back to the original county lines. That is gerrymandering, and it is used to oppress and separate our voices."

J. Law views voting not as a civic duty, but a tool for change. She explains, "The bad news can feel overwhelming at times, but the most important thing is to stay focused on the ways we can all be part of the solution. In the wake of the deaths of George Floyd, Breonna Taylor, and countless others, I'm inspired by the millions of people around the world who have banded together to finally say 'enough'… the collective voice of the people enacting real change, and that gives me hope."

However, she adds, "But there's still a lot of anger, which I think is important."

The actress emphasizes the importance of voting, calling it the "responsibility" of American citizens. "We have liberties and freedoms in our country and advantages that not everyone has. It's something that we as citizens have to do and a right we shouldn't take for granted, especially when so many aren't afforded this right," she implores. "We need to all be actively participating in our democracy, and one degree of participation is voting."

When the singer goes into the voting booth, she's casting a ballot for change. "Voting is so important because it is one way to show up for ourselves and our communities. It's an opportunity for us to honor our ancestors—those that were unable to vote because of racism and sexism—and elect people that we hold accountable," she explains, adding, "I am so proud of the young people organizing, particularly Black people, who are leading this movement."

As the soccer player puts it, she is going to her polling center to "vote in the interest of others" who may not enjoy the same rights she has.

"I believe voting is a part of a deep responsibility each of us have to make this country better. Every right and liberty [that] I enjoy has been voted into law," she states. "The world I want to live in is not reflected in our government officials and that needs to change. This election is a choice between democracy or autocracy. There is no other reason I need to vote in November."

The singer is voting for numerous reasons, but equality is the biggest motivator. "The change we need most is to elect a president who recognizes that people of color deserve to feel safe and represented, that women deserve the right to choose what happens to their bodies, and that the LGBTQIA+ community deserves to be acknowledged and included," she shares. "Everyone deserves a government that takes global health risks seriously and puts the lives of its people first."

For more information on how to participate in the 2020 elections, click here.

END_OF_DOCUMENT_TOKEN_TO_BE_REPLACED

END_OF_DOCUMENT_TOKEN_TO_BE_REPLACED
We and our partners use cookies on this site to improve our service, perform analytics, personalize advertising, measure advertising performance, and remember website preferences.Ok