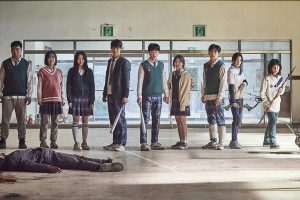 Called Studio TooN and based in South Korea, the joint venture will plan and make webtoons with Japanese and Korean creators for the global market. One of TBS’s aim in launching the company, its first such venture in Korea, is to produce TV dramas, anime and other content from the webtoons.

Studio TooN will begin operations in June of this year with Shine Partners president Keita Iwamoto serving as CEO.

“When webtoon works are visualized, there is a synergy effect as the number of readers increases,” said Naver Webtoon CEO Kim Junkoo. “We are delighted to be partnering with TBS, Japan’s leading content production company.”

Originating in South Korea as comics for smartphones and other digital devices, webtoons have since spread around the world.

A member of the Naver group, Korea’s largest tech company, Naver Webtoon is the world’s biggest webtoon platform, boasting 82 million active users. The company’s webtoons, including “True Beauty,” “Hellbound” and “All of Us Are Dead,” have been adapted into hit films and TV series.

TBS is one of Japan’s five major terrestrial broadcasting stations. Established in 2016, Shine Partners is Japan’s only company specializing in webtoon production. Its original titles include “Revenge Love” and “It Always Rains on Big Days.”