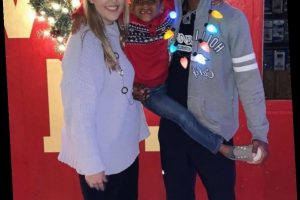 Five years after she adopted a former student and his younger brother, a 29-year-old mother from Georgia has managed to pay off tens of thousands of dollars in debt.

Teacher Chelsea Haley knocked out $48,683 worth of debt from her student loans and credit cards by working side jobs, such as tutoring and delivering groceries, according to Good Morning America. She also sold her home and moved back in with her parents.

Much of Haley's debt came from attorney fees she paid while seeking custody of her two sons, Jerome, 17, and Jace, 6.

Haley was teaching with Teach for America in Louisiana in 2015 when she had Jerome as a student in her fourth-grade class, GMA reported.

At the time, Jerome was getting into academic trouble and was frequently suspended from school. That's when Haley focused on being a beacon of support for the young boy by cheering him on at football games and buying him school supplies.

In 2016, Haley got full custody of Jerome, and later took in his younger brother, Jace.

"Being their mom is the greatest blessing of my life," Haley told GMA. "I get to wake up in the morning and love two little guys." Now Haley is hoping to save up for a new house. She also wants to help Jerome with any college expenses after his graduation from high school.

"It allows me to focus on the boys' future," Haley said of eliminating her debt. "Saving money for them, and not spending it on my past."

"It doesn't feel real yet," she continued. "It's so amazing. I even logged into my student loans and it said, 'Cleared. Zero balance.'"

Haley told the outlet that other people feeling the weight of debt should take a hard look at their finances and see where they can start chipping away.

She recommended tackling expenses with the highest amount of interest first. Haley also suggested looking at your budget and seeing where money can be saved, and taking up other sources of income if possible.

"Knowing you'll have a lot more freedom once it's paid off," is what makes the effort worth it, Haley told GMA.

END_OF_DOCUMENT_TOKEN_TO_BE_REPLACED

END_OF_DOCUMENT_TOKEN_TO_BE_REPLACED
We and our partners use cookies on this site to improve our service, perform analytics, personalize advertising, measure advertising performance, and remember website preferences.Ok