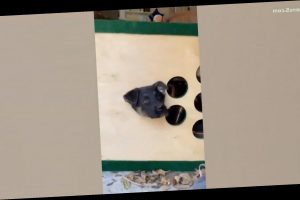 A 10-week old puppy from Texas brought a whole new meaning to the phrase "ace in the hole."

According to local news station KENS 5, a family living in Fair Oaks Ranch had a scare while gardening outside on Friday when their puppy, named Ace, accidentally got his head stuck in one of the holes of a wooden cornhole board.

While the family tried everything they could think of to free Ace, the canine could not escape from the hole.

Owner Kurt Leslie detailed the incident on NextDoor and revealed that he and his family called the Fair Oaks Ranch Police Department to help save Ace from his unusual predicament.

"We had an Ace in the hole!!" said Leslie. "We called our local heroes at the Fair Oaks Ranch Police Department, and in moments Officer Michael Maddox was on the scene followed shortly by Officer Amanda Hinojosa. It took a few minutes to formulate a plan, and the officers sprung into action." While the family held Ace, Officers Maddow and Hinojosa managed to maneuver the puppy out of the cornhole board, Leslie said.

Leslie shared a photo of his daughter holding the newly-freed Ace alongside both officers, whom he thanked for pulling off the harrowing rescue, KENS 5 reported.

Ace was uninjured and unbothered by the incident. According to CBS8, two days after breaking free of the board, the puppy was treated to his own Easter basket, filled with treats and several brand new toys.