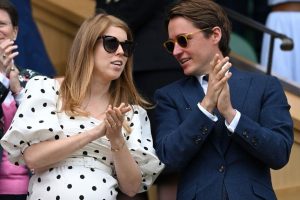 Any new mum knows that babies come into this world and create chaos – along with a sense of awe and wonder of course! But there are many traditions that royal mums and babies are supposed to historically stick to. Some sounds rather lovely, others, perhaps not…

Can you imagine anything more awful than Priti Patel being in the birthing suite with you as you labour?! Before Prince Charles was born in 1948, the British Home Secretary customarily attended all of the royal births. The presence of a government official supposedly "verified" the event, but luckily the Queen did away with this practice and paved the way for greater privacy. Princess Beatrice can surely breathe a sigh of relief.

The idea of second hand baby clothes might be slightly ewwww to some new mums. But not the royals (who surely have access to the best dry cleaners anyway). There is one gown, originally commissioned by Queen Victoria for her oldest daughter, that around 60 different babies have worn from 1841 until 2008, when James Viscount Severn wore it. Even Prince George, Princess Charlotte and Prince Louis have since worn the reproduced dress made of Honiton lace.

They're issued a passport at birth

Did you know that The Queen is allowed to travel internationally without a passport? The rest of them still need this though. While most newborns don't do much flying until they're older, a royal baby must be ready to go at all times — so they’re immediately give a passport. We suspect that in Covid-struck times however, Princess Beatrice and her bubba might be staying here for a while.

There is a large medical team involved in any birth

Most pregnant patients on the NHS see a whole host of different midwives and doctors, but not the royals. They are treated by the same team of midwives and doctors throughout the pregnancy and birth – and there are a lot of them. During Princess Charlotte's birth, Professor Jacqueline Dunkley-Bent and Arona Ahmed served as midwives. The top of their game medical team also consisted of two obstetricians, three anaesthesiologists, four surgical staff members, two special care staffers, four paediatricians and a lab technician. We imagine Princess Beatrice has the best medics on speed dial – but there won’t be as many as Kate had.

Forget ordering standard Mamas & Papas knitwear to bring your bubba home, the royal offspring get wrapped in special blankets. G.H.Hurt & Son has produced the luxury knitted-lace shawls in Nottingham, England, for more than 100 years. Prince George, Princess Charlotte and Prince Louis made their debuts swaddled in the fine wool, and the company even provided a shawl for Prince William when he was a baby.

Babies have at least three names – and loads of godparents!

Hate your middle name? Be grateful you’re not a royal – they're landed with more than one. Prince William and Prince Charles both have four, and they have to have royal significance. Princess Beatrice is likely to choose something more modern however. The general rule of thumb for royal baby names is that the further they are down the line of succession, the more traditional they can get, so Princess Eugenie opted for August, and her sister can follow suit. They normally have load of godparents too – but forward-thinking Beatrice will no doubt pick no more than a handful.

When Kate had her Prince Louis, she was showing him off to the crowds outside the hospital less than seven hours after the birth. (It helps having a hairdresser come to the maternity ward.) Princess Diana established this practice of standing outside of the Lindo Wing with William and Harry, and The Queen used to take her newborns out on the balcony of Buckingham Palace. It’s likely Beau won’t bother. She’ll be allowed to wear her milk-stained tracksuit bottoms in private for while – we hope.

Yep, even the boys. A 16th century tradition called for all newborns — whether they were male or female — to wear dresses for the first few years. They then transitioned to trousers and shorts. While the current generation of royals doesn't follow this anymore, Prince Charles was seen in dresses until he was two or three years old. Poor lad! Royal boys can usually only be seen in shorts until they’re aged eight – when trousers become allowed in public.

Buckingham Palace posts a notice of the birth outside the gates

There’s a time-honoured tradition of sharing details of the birth – including gender and time of delivery – on a typed out document outside Bucks Palace. We strongly suspect the first we hear of the newest royal’s arrival will be on social media this time.

Descendants along the female line don't get titles

According to the Letters Patent issued in 1917, only the grandchildren born to the sons of the Sovereign receive titles. Princess Anne's children don't use His or Her Royal Highness. And we don’t think Beatrice’s will either.

For the latest updates on the Royal Family, sign up to OK!'s daily newsletter.