Home » Lifestyle » The 5 Most Popular Card Games For Adults

The 5 Most Popular Card Games For Adults

Inexpensive, unpredictable, and likely to induce non-stop laughter, the most popular card games for adults are the perfect addition to any gathering. You can expect the best games to help break the ice with new friends and give old friends another reason to laugh until they cry.

Adult card games are gaining popularity — there are endless options to choose from — so it’s important to know what qualities make them good. The main factors you’ll see in the best card games for adults are simplicity, variation, and a flexible player range (for any sized group). You should be able to explain your game of choice in just a few sentences, and definitely opt for something with at least 100 cards to avoid repetition. The games on this list all work for three to four players, but most of them can actually handle up to 20 players (aka they’re perfect if, like me, you come from a massive family).

So when you’re ready to take that upcoming dinner party to the next level or play a rousing game with your family, these are five games that’ll guarantee a laugh. Grab one — or five — to let the good times roll!

1The Overall Most Popular Card Game For Adults 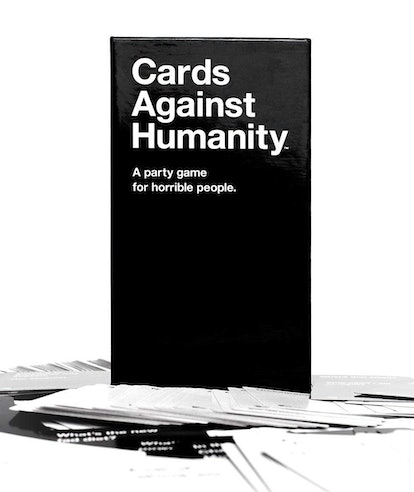 What’s great about it: With over 30,000 reviews on Amazon and a near-perfect rating, this adult card game is clearly a fan favorite. Self-described as "a party game for horrible people," the Cards Against Humanity rules are simple: In every round, one player randomly draws a black card and reads the question aloud, and the other players answer it with what they believe is their most outrageous white card. Then, the black card holder chooses their favorite answer for that round. This deck consists of 500 white cards and 100 black cards in total, for a ton of variety.

What fans say: "I like to think I am a good, wholesome person, but I still love this game. I have played it with a very large group of people during a game night. Everyone was cracking up laughing the whole time, we went through every card in the box, and it was the only game we played that night. There were people crying because they were laughing so hard."

2The Runner-Up: A Game That’s Perfect For Pop Culture Fans 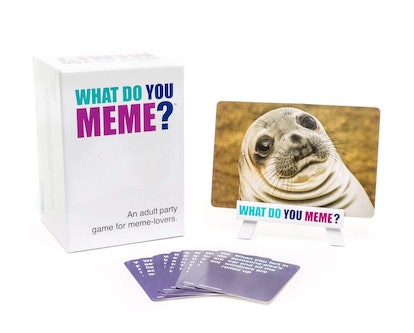 What Do You Meme? Party Game

Number of players: Three or more

What’s great about it: The What Do You Meme? card game finally lets you enjoy the hilarity of the internet IRL. Players compete to put together the best meme by choosing the funniest caption card to go with whatever photo card is on display. Each player takes a turn acting as judge and decides who has crafted the best meme. With 360 caption cards and 75 photo cards in total, this game is designed to last anywhere from 30 to 90 minutes (though many reviewers said they played for even longer). The set also includes an easel for displaying the photo card in play.

What fans say: "We literally couldn’t stop playing and didn’t end up quitting until we had exhausted every single meme in the stack, 2.5 hours later. There were many times the judge couldn’t finish reading a card because we couldn’t breathe from laughing so hard! Definitely recommend." 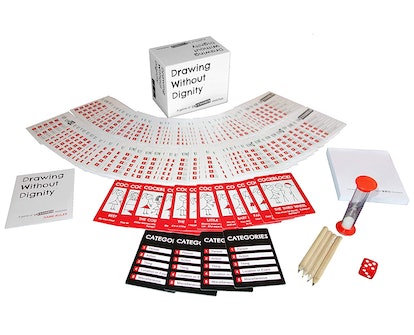 What’s great about it: With a near-perfect rating and a Pictionary-esque setup, Drawing Without Dignity challenges you and your group to dust off your drawing skills and leave your mind in the gutter. Players take turns drawing suggestive or unorthodox clues, like "paternity test" or "constipated," and other players try to take their best guess. The game comes with 150 cards, an hourglass timer, pencils, a notepad, and one die. With a total of 670 clues to draw, this game offers plenty of distasteful play.

4The Best To Play With Close Friends 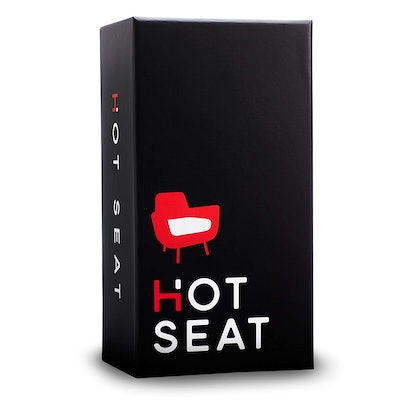 What’s great about it: This adult card game for friends is a great way to hilariously bond even more with the people who know you best. The premise is easy: When it’s your turn in the rotating "hot seat," you read a question about yourself out loud from one of the cards. Everyone writes down what they think your answer would be, and you answer the question, too. Then, everyone tries to guess which answer was really yours. With over 200 questions included in the pack, it’s easy to play repeatedly and never get tired of this game.

What fans say: "The amount of laughs that we had playing made the night very memorable. It was an instant hit with my friends who are still raving about it days after."

5The Best Adult Card Game To Play With Anyone 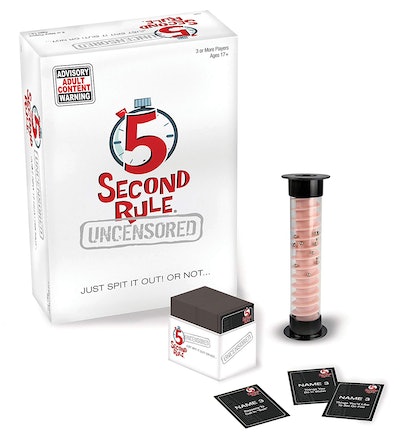 Number of players: Three or more

What’s great about it: Whether it’s cousins you haven’t seen in forever or a group of newer friends you’re trying to bond with, this adult card game is great to play with just about anyone. With a unique timer that gives you five seconds, your goal is to provide three answers to a suggestive, funny, or unusual prompt, like "name three things you do in water" or "name three ways to hide a fart." In addition to the timer, the set comes with 150 cards that are double-sided for plenty of play time.

What fans say: "This game is hilarious! I bought it intending to play with a couple of my friends at home, but now I take it to the bar when I go out. My friend and I would read questions to each other, but now EVERYONE gets involved!! It is so much fun! There are no wrong answers! The more people, the better the responses!"

Elite Daily may receive a portion of sales from products purchased from this article, which was created independently from Elite Daily’s editorial and sales departments.