And unlike what some people may think, they're not all in London either as the top spot outside of the capital was claimed by the St. Albans District in Hertfordshire. 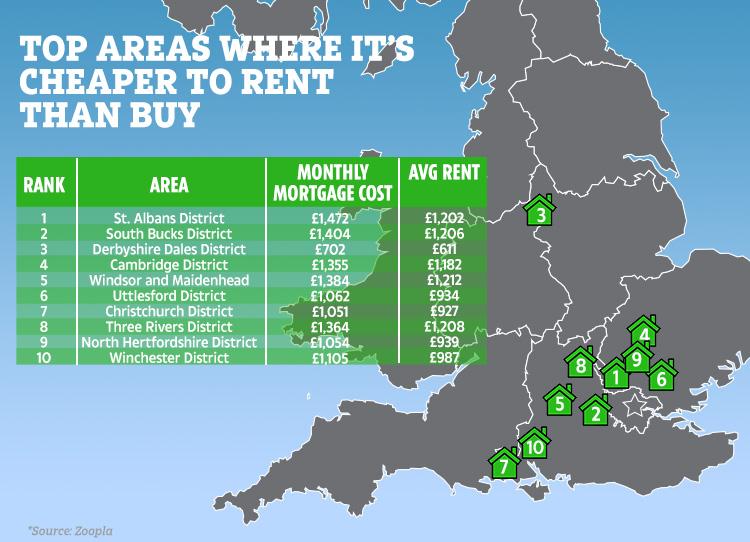 Property website Zoopla compared the average monthly cost of renting a property to the monthly cost of repaying a mortgage across Britain's council areas, and it found that in St Albans, renting is 22.4 per cent (£270) cheaper than owning a home.

Meanwhile, the district of South Bucks in Buckinhamshire came second, with a difference of 16.4 per cent, followed by the Derbyshire Dales in the East Midlands at 14.9 per cent.

In London where house prices are higher than elsewhere, the data showed that it's actually better to rent than buy in 63.6 per cent of its boroughs. 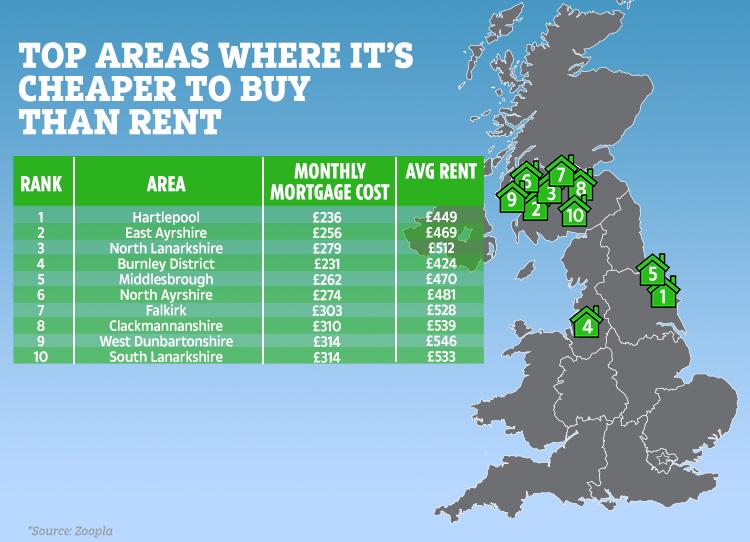 At the other end of the spectrum, the coastal area of Hartlepool came first as being the most cost-effective for buying, working out as an average of 47.4 per cent (£213) cheaper than renting.

In fact, 75 per cent of council areas across Britain were found to be more cost effective for home buyers.

Overall, Scottish areas were the most common amongst the top areas where buying beats renting, with seven of the top 10.

What help is out there for first-time buyers?

Help to Buy Isa – It's a tax-free savings account where for every £200 you save, the Government will add an extra £50. But there's a maximum limit of £3,000 which is paid to your solicitor when you move.

Help to Buy equity loan – The Government will lend you up to 20 per cent of the home's value – or 40 per cent in London – after you've put down a five per cent deposit. The loan is on top of a normal mortgage but it can only be used to buy a new build property.

Lifetime Isa – This is another Government scheme that gives anyone aged 18 to 39 the chance to save tax-free and get a bonus of up to £32,000 towards their first home. You can save up to £4,000 a year and the Government will add 25 per cent on top.

"First dibs" in London – London Mayor Sadiq Khan is working on a scheme that will restrict sales of all new-build homes in the capital up to £350,000 to UK buyers for three months before any overseas marketing can take place.

Starter Home Initiative – A Government scheme that will see 200,000 new-build homes in England sold to first-time buyers with a 20 per cent discount by 2020. To receive updates on the progress of these homes you can register your interest on the Starter Homes website.

Lawrence Hall, spokesperson for Zoopla, said: "In some areas renters are paying a premium when you compare their outgoings to that of homeowners servicing a mortgage.

"Of course, buying isn’t always a viable option for those who aren’t able to put down a deposit or want the flexibility renting can offer.

"Those looking for comparatively cost-effective places to rent should keep an eye on the country’s top locations such as St Albans, where renting is almost a quarter cheaper than servicing a mortgage."

Renters hoping to get on the property ladder should consider moving to Burnley, Dundee or Hull – the cities are the top three most affordable cities where first time buyers can save up a five per cent deposit in under a year.

Meanwhile, these are the four cities where house prices have risen by more than 50 per cent in 10 years.

Rent prices are also expected to soar by 15 per cent over next five years as the number of properties "dries up".