Home » Lifestyle » 'The Bachelorette': What Is Tayshia Adams' Net Worth and How Much Will She Make for a Partial Season of the Show?

'The Bachelorette': What Is Tayshia Adams' Net Worth and How Much Will She Make for a Partial Season of the Show? 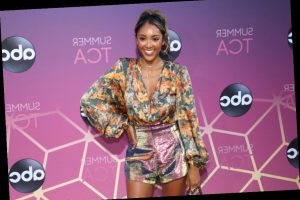 There have been rumors swirling for months that  Tayshia Adams would replace Clare Crawley as the lead on this season of The Bachelorette. Now, those rumors have been confirmed and promos featuring Adams have already started airing. Since Adams is newly stepping into the lead role, there isn’t as much information published about her as there normally would be at this point in the season, but there are still enough clues about Adams to figure out how much the star could potentially be worth.

Tayshia Adams has been on multiple ‘Bachelor’ shows

Before taking the lead role, Adams first appeared on Colton Underwood’s season of The Bachelor. She made it to the top three but was sent home when Underwood unexpectedly chose Cassie Randolph during the Fantasy Suites portion of the season. Since contestants aren’t paid to go on the show, Adams probably did not earn any money directly for her appearance on The Bachelor.

Bachelor in Paradise, however, is a different story. Contestants on the dating show do get paid, however, the amount varies. According to Reality Steve, some cast members get paid per episode and others get a flat rate. Adams remained on the show throughout the season and even ended the season in a relationship with John Paul Jones. So, if she was paid for her airtime, it stands that she got a pretty hefty paycheck. Cosmopolitan estimates that Adams made between $7,000 and $15,000 for her time on BIP.

Job before ‘The Bachelor’

Adams didn’t come onto The Bachelor with one of the typical Bachelor women jobs like a flight attendant or real estate agent. When fans were first introduced to Adams, she was working as a phlebotomist. According to Indeed, the average salary for a phlebotomist in the U.S. is $12.86 per hour.

After going on The Bachelor, Adams took the same route as several other contestants and began posting sponsored content on Instagram, which undoubtedly earned her extra cash.

What is Tayshia Adams’ net worth?

No official net worth has been published for Adams. Cosmopolitan has estimated that the new Bachelorette is worth between $1 million and $5 million.

How much will she be paid as the Bachelorette?

The leads on Bachelor shows are well paid but given that Adams and Crawley are splitting this season, it is unknown how much each will be paid.

Emily Maynard from season 8 of The Bachelorette reportedly was paid $250,000. Given that Crawley will probably only be in one more episode this season, it seems that Adams would be given the bulk of the payment if they are both acting as one Bachelorette. However, ABC could decide to give them both the full salary amount.

Some people and Bachelor experts like Reality Steve have begun to speculate that Adams was always going to be the Bachelorette.

“Based on the timing of when we heard Tayshia was headed to La Quinta to begin quarantine then film (it was nine days after Clare’s first night), I can report to you that this was in productions plan before Clare’s season started,” Steve wrote. “They knew Clare would be removed at some point during this season and replaced as the “Bachelorette” by Tayshia. Did Clare know? No. Did the guys know? No. But production sure as h*ll did.”

Fans will have to wait until The Bachelorette continues at a special date next week, Thursday, Nov. 5 at 8 p.m. ET on ABC, to see how everything plays out.

END_OF_DOCUMENT_TOKEN_TO_BE_REPLACED

END_OF_DOCUMENT_TOKEN_TO_BE_REPLACED
We and our partners use cookies on this site to improve our service, perform analytics, personalize advertising, measure advertising performance, and remember website preferences.Ok