The best of the Hadley’s, Australia’s richest landscape prize 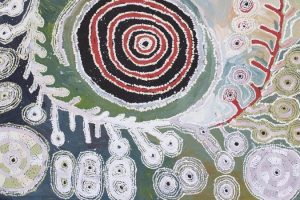 Unlike Errol Flynn and Douglas Mawson, I’d never stayed at Hadley’s Orient Hotel in Hobart – until it hosted an art prize. Established in 1834, Hadley’s is one of the oldest hotels in Australia, and it trades lavishly on its historical connections. There are plenty of hotels that are more up-to-date and luxurious, but not one in Tasmania or the mainland that hosts an annual landscape prize worth $100,000 to the winner.

The Hadley’s Art Prize was launched in 2016 by the current owners, surprising everyone with its generosity. It bills itself as “the richest landscape prize in Australia”, offering twice as much as its local counterpart, the Glover Prize (for Tasmanian landscapes), and the Wynne Prize at the Art Gallery of NSW. 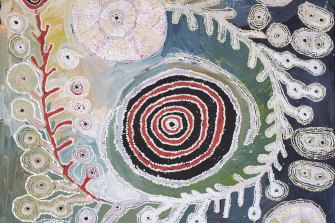 This is the fifth occasion on the which the Prize has been awarded, and the third time it has gone to an Indigenous artist, in this case, Tuppy Ngintja Goodwin, from the Mimili Maku Arts group in Central Australia. Not long ago there was a reluctance to include Indigenous works in landscape competitions, possibly because these pictures were placed in a separate (unspoken) category called “Aboriginal art” and quarantined from the mainstream. There might also have been a suspicion that once the floodgates were opened Indigenous paintings would dominate these shows, and that’s exactly what has happened.

These works dominate not only because judges have become more alert to Indigenous artists, but because the paintings are often more imaginative, original and surprising than landscapes in the European tradition. They are “landscapes” in a very deep sense, because for the artists in remote communities the land is fundamental to the Tjukurpa, which incorporates everything from Creation stories to rules for living. Tuppy Goodwin’s winning painting, Antara, refers to the Witchetty Grub Tjukurpa, which is her own special subject. She paints both the topography and ceremony associated with the story in a series of dynamic, swirling forms outlined in white against a strangely murky background.

Goodwin’s work is a very credible winner, although the judges must have been tempted by another painting, which received a ‘Highly Commended’. That was Bugai Whyoulter’s Wantili (Wantili, Canning Stock Route Well 25), a veritable hurricane of red dots, clustered closely together, offset by a plane of creamy white, also made from dots. It’s the work of an instinctive painter who treats the landscape as if it were an extension of her own psyche, although it might be more correct to see the artist as the agent that gives expression to the spirit of the land. 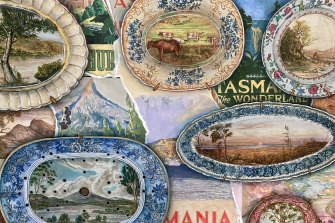 The other 33 finalists represent a broad variety of styles and approaches, from a raw harbour view by Ken Done, to a constructed photo of a child looking at a pot plant, by Pat Brassington. Some, such as Jane Burton, Melissa Smith and Martin Rek, have confined themselves to shades of black-and-white; others such as Anne Morrison and Milan Milojevic, have gone all out with colour.

One potential crowd-pleaser is Wayne Brookes’ painting, Knut Bull in a China Shop, which reproduces the work of the colonial artist on a series of plates hung on a trompe l’oeil wall. Mary Tonkin has one of her vibrant, characteristic paintings of the rainforest in the Dandenongs. In Shadowlands, Alex Wanders has created a blend of landscape and architecture that puts a metaphysical slant on life in Tasmania. 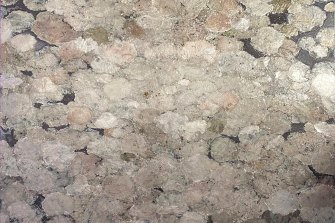 Catherine Woo’s A Moment in the Day.

Like bowerbirds, human beings seem to be attracted to shiny things, and Catherine Woo has produced the shiniest work in the show, earning herself the local Packers’ Prize. Woo’s A Moment in the Day captures a range of reflections, some brighter, some duller, in dabs of silvery paint applied to a sheet of aluminium. It’s a completely abstract picture that hints at light glittering on water. Other artists, such as Lorraine Biggs and Sue Lovegrove, have painted more recognisable lakes and lagoons, but Woo has stripped things back to the essence.

As no trip to Hobart is complete without a visit to David Walsh’s Museum of Old and New Art (MONA), I dutifully undertook that pilgrimage. Now in its eleventh year, MONA seems less self-conscious in its provocations, but still an ongoing cultural experiment. 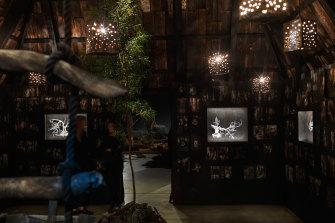 Along with the permanent collection, devoted to sex and death, science and religion, the museum is hosting three large installations: Jeremy Shaw’s multi-channel video, Shifting Phase Index; Robert Andrew’s Within an Utterance; and an extraordinary collaboration between Fiona Hall and A.J. King, called Exodust: Crying Country.

Shaw’s video cycle runs for about 20 minutes, but my attention tended to wander from screen to screen, where groups of people danced, or exercised, or engaged in some other ritualistic activity. After a while it didn’t matter what they were up to, as other people’s organised obsessions soon become tedious to the uninitiated. What unites those within a group may alienate those on the outside – which may be the point of the work. 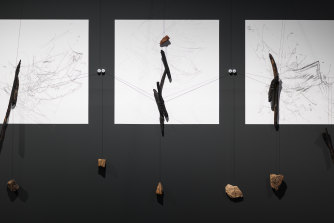 Robert Andrew’s Within an Utterance at MONA.Credit:MONA/Jesse Hunniford

Robert Andrew has become a familiar presence in contemporary exhibitions over the past year or two with high-tech installations based on Indigenous languages. Within an Utterance is his most complex piece to date, the largest component consisting of a series of wall drawings in charcoal and ochre, each set in and around a neat, white square. The work is controlled by a “mechanical plotting system” in the centre of the room that sends signals to the drawing implements. The result is all smears and scratches, but the emphasis is on mark-making and communication.

The marks are physical translations of palawa kani, described as the “revived” language of Tasmanian Aboriginal people. They are crude and abstract, as the language has had to be pieced together from written records and community memory; the living speakers are long gone. This is the case with most of the Aboriginal languages once spoken on this continent, which makes it crucial that languages such as Pitjantjatjara, spoken by Tuppy Goodwin, are supported and fully documented.

Hall and King’s Exodust is the undoubted highlight of the current MONA display. A work of staggering scale and ambition, it presents an apocalyptic vision of burnt, devastated nature; the ravages of war; the depredations of colonial history, and the ambiguous forces of religion and sexuality.

Inside a massive, burnt-out wooden “cremation hut”, Hall and King have installed a coffin that resembles a packing crate and a stained-glass window made from plastic bottles. They’ve papered the inner walls with hundreds of blackened but still familiar historical photos, and hung a set of metallic reliefs, combining phalluses with broken trees and root systems. Outside the hut, entire tree trunks have been carbonised. On the back wall, models of cultural monuments made from bread lie in various states of devastation.

The excessive, theatrical nature of the piece owes a great deal to Hall’s hyperactive imagination. The tone has been shaped by King’s sense of the crimes committed against the original inhabitants of Tasmania. It’s a chronicle of violence against nature and humanity that starts on one small island and expands to encompass the entire world and its history. I couldn’t help thinking of Tuppy Goodwin and her kin patiently retelling the age-old story of the Witchetty Grub, quite indifferent to this avalanche of devastation that has left such scars on our battered and bruised civilisation.

The Hadley’s Art Prize is at Hadley’s Orient Hotel in Hobart until August 21. MONA’s current displays run until October 17.

John McDonald was a guest of Hadley’s Orient Hotel.