Well, Bachelor fans, we’re nearing the end of a season for the books. We’ve had sloths. We’ve had like eight "villains." We’ve had far too many workout-involved group dates. (Seriously, Colton? WTF?) We’ve had literally three women leave this season on their own accord. And we’ve had a solid amount of ~lewks~ served by the girls (and Colton) of this season. And even as the season winds down, the best outfits on The Bachelor week eight are still bomb AF.

During pretty much every single hometown, each of the girls’ dads had some thoughts for Colton, mostly along the lines of "you’re dating a bunch of other women at the same time, so how can I trust you with my daughter?" Honestly? Valid. While Colton had the difficult role of jumping through a bunch of hoops on these hometowns, I had the arguably even more difficult role of picking the best looks from this episode. But someone has to do it. So here are the two looks from week eight that deserve some recognition. 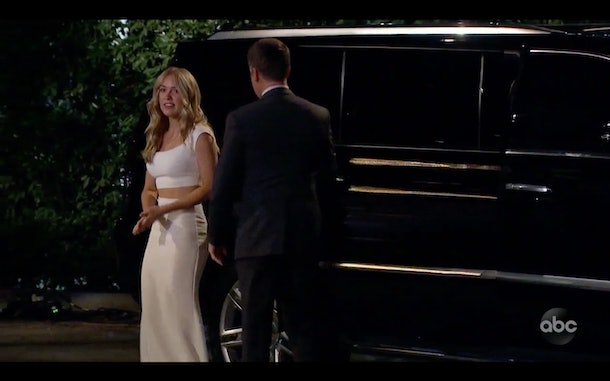 Is it just me, or does Cassie hear wedding bells in her potential future with Colton? Regardless, a full stark-white look is a bold move, and TBH, I commend Cassie for it. Earlier in the night, during her hometown with Colton, she wore a super cute red cotton jumpsuit with light-colored buttons up the bodice. Later, her white two-piece ensemble featured a slightly-off-the-shoulder, short-sleeve crop top and a long, fairly fitted skirt. Elegant, but not too elegant, if you catch my drift. Ultimately, it’s Cassie’s overall vibe through and through.

Tayshia In A Champagne Dream 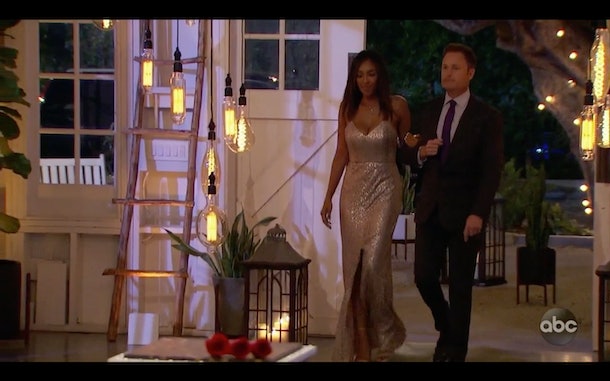 Tayshia is up in this episode with. The. Damn. Looks. During her and Colton’s one-on-one date, she wore a a super cute and casual white crop top with light wash jeans and white sneakers. However, it was at the final rose ceremony of the night that Tayshia really wowed with her look. She walked through the doors arm-in-arm with Chris Harrison wearing a stunning champagne-colored strapless gown. The long dress featured a middle slit up the front of the dress (a power move if I ever saw one), and the neckline added even more visual interest to the gown, with pointed tops of the bodice.

While Cassie and Tayshia certainly brought their sartorial A-game this week, tune in to this spot next week for what will surely be a fashion-focused fantasy suites episode.