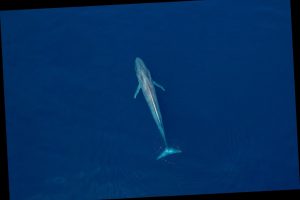 Call it a comeback!

According to BBC News, blue whales have returned to the waters around the sub-Antarctic island of South Georgia, once a huge whaling hub, after a decades-long absence that many conservationists feared was permanent.

This impressive resurgence has been documented through sightings, photos, and underwater recordings collected over the past 30 years, reports UPI. The promising findings of this hard work were recently published in a paper in the journal Endangered Species Research.

The findings show that only one blue whale, the world's largest mammal, was sighted by scientists near South Georgia between 1998 – 2018. But then, in February 2020, scientists spotted 58 blue whales in the area and record the songs of dozens more.

"The continued absence of blue whales at South Georgia has been seen as an iconic example of a population that was locally exploited beyond the point where it could recover," lead study author Susannah Calderan said in a release obtained by UPI, referring to the booming whaling industry in South Georgia that reportedly killed 42,698 whales between 1904-1971.

"But over the past few years we've been working at South Georgia, we have become quite optimistic about the numbers of blue whales seen and heard around the island, which hadn't been happening until very recently," she added.

The return of the blue whale to Antarctic waters might not be as sudden as it seems, the paper notes that scientists have also relied on photos from tourists and sailors to keep track of blue whale sightings near South Georgia. Out of the photos sent in, 41 blue whales in South Georgia were photo-identified between 2011 and 2020.

Based on the continued sightings rolling in from scientists and civilians, the paper's authors appear to be cautiously optimistic about the direction of the Antarctic blue whale population.

"We don't quite know why it has taken the blue whales so long to come back," Calderan said. "It may be that so many of them were killed at South Georgia that there was a loss of cultural memory in the population that the area was a foraging ground, and that it is only now being rediscovered."

"With South Georgia waters designated as a Marine Protected Area by the Government of South Georgia and the South Sandwich Islands, we hope that these increased numbers of blue whales are a sign of things to come and that our research can continue to contribute to effective management of the area," the paper's co-author Jennifer Jackson, a researcher with the British Antarctic Survey, added.