Home » Lifestyle » The Clegane Bowl On ‘Game Of Thrones’ Was So Intense, I’ll Never Sleep Again

The Clegane Bowl On ‘Game Of Thrones’ Was So Intense, I’ll Never Sleep Again

When it comes to Game of Thrones, there are long-standing theories fans have held onto for years, and there are prophecies, either from the books or the show, which viewer have been puzzling over. Then there’s Clegane Bowl. Warning: Spoilers for Game of Thrones Season 8 follow.

The concept of Gregor Clegane, aka The Mountain, versus his brother Sandor Clegane, aka The Hound, first came from the books, when both characters seemingly died and then were brought back to life. In the novels, The Hound is not as alive as he is in the show, but a shuffling man in monk’s robes, where his movements suggest he’s not much more alive than Gregor is in his tin can of armor after Qyburn’s experiments. The ridiculous idea of Sandor making it back to King’s Landing and the two half-dead Cleganes duking it out became known as Clegane Bowl and has, over the years, become one of the most anticipated parts of the final season.

Something that overhyped was probably never going to live up to fans’ imagination. After all, the Clegane Bowl in the book seemed more like a joust gone mad, or an Oberyn-style duel. Now that it finally happened in the fifth episode of the final season, in the middle of an already wild battle in King’s Landing, it was never going to be the standout set piece fans were hoping for.

Though this was a promising start: 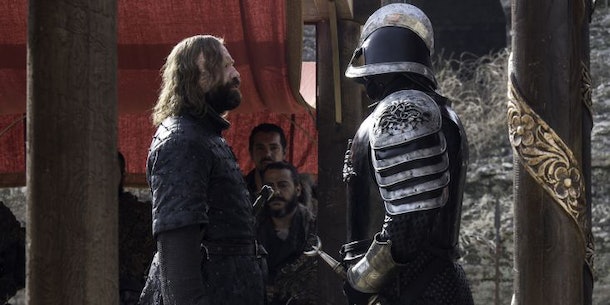 The arrival of The Hound and Arya to King’s Landing came right in time to get into the city just before Cersei closed the gates against Jon Snow’s troops and Daenerys Unsullied. However, knowing Arya’s ultimate quarry didn’t sit well with the Hound. He might have let it go, but then Daenerys went mad. The Hound turned around and told Arya to go home. "Don’t be like me."

Arya listened and turned back.

The Hound went on alone. It wasn’t long before he found his intended opponent either. The Mountain, Qyburn, and Cersei were on their way back down the stairs, trying to escape the Red Keep in the face of the Unsullied breaching the gates.

The Mountain knew the second he saw his brother what was coming. Cersei and Qyburn did not. Both commanded him to stay with Cersei, Qyburn even tried to throw himself in from of the Mountain, only to get his brain bashed out. No, fool! You cannot stop Clegane Bowl! Bless Cersei, she just kept running. 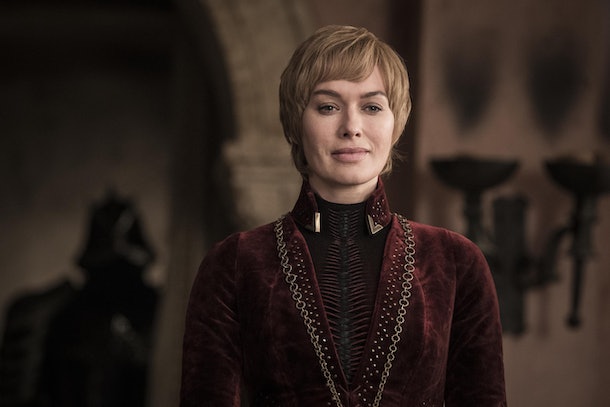 The fight between The Hound and The Mountain was ugly and raw. It wasn’t long before the Mountain lost his helmet, revealing a pasty white face, not unlike the one under Darth Vader’s helmet after all those years. The Hound was horrified, but the Mountain clearly only had one thing in mind.

The Hound had the upper hand. He stabbed the Mountain straight in the chest… and it did nothing. Whatever Qyburn did to Gregor was too powerful. He fought him, he stabbed him, he punched him in the head. Nothing worked.

And then, as if from some deep horrible memory, the Mountain reached for his brother’s face and put both thumbs in his eyes. In response, the Hound stabbed his brother in the eye in retaliation, and the two fell from the tower together to their deaths.