Pick a male character from Crazy Rich Asians at random, and odds are he was shirtless in the movie. One guy, Michael Teo (played by Pierre Png) is even introduced by his torso before his face appears on-screen. If you think all this nudity was done to satisfy thirsty viewers, you’d be right, but only partly. There is a deeper reason behind the male shirtless-ness in Crazy Rich Asians, according to co-screenwriter Adele Lim — to bust stereotypes about Asian men on-screen.

"A lot of Asian women [in pop culture] are depicted as sex workers, or victims in human trafficking… and the men are strictly relegated to these tech-y, asexual roles," says Lim, speaking to Bustle over the phone recently.

Throughout history, Asian men have rarely been depicted as romantic leads on television or in movies; not until John Cho’s short-lived Selfie (2014) had there even been an Asian male romantic lead on American TV. Lim recalls how, whenever she was asked to write Asian characters during her 15 years working in TV writer’s rooms, they’d inevitably have to fit some kind of stereotype, be it the over-sexualized Asian woman or the de-sexualized Asian man. And though she tried to incorporate sexy, male characters into many of her writing jobs, there was always pushback — until Crazy Rich Asians. With this movie, she (and co-screenwriter Peter Chiarelli) finally had the chance to craft scenes that specifically showed Asian men being sexy.

"The opening shot of Pierre Png, who plays Astrid’s husband, in the shower — these are foreign images for us, that we want the men to be viewed in full ways," Lim explains. "And we want people to get used to that idea."

For CRA, she and director Jon M. Chu peppered in as many shirtless scenes as they could and also tried to include as many love scenes as possible (like that kiss suggesting that Rachel and Nick made it to the mile high club on their flight to Singapore). "It was very intentional because we don’t see Asian couples, and we don’t see Asian men that way — ever. Or very, very rarely," says Lim.

Even when Asian men are allowed to be romantic on-screen, like Sayid Jarrah (Naveen Andrews) and Jin-Soo Kwon (Daniel Dae Kim) on Lost, or Prince Christopher (Paolo Montalban) in Rodgers & Hammerstein’s Cinderella, it almost always feels like a surprise to audiences. So for CRA, "we wanted to make it part of the fabric of this movie," says Lim. "And, yeah, give women something to look at!"

The stereotype of Asian men being asexual or effeminate has been around for decades, as seen in Breakfast at Tiffany’s (1961) or the original Star Trek show. Yet with CRA, Lim didn’t just want to disprove assumptions about Asians — she wanted to demonstrate the truth, too. "The point is not to say that we’re not a certain thing. The point is to say that we’re people, just like anyone else," she says. 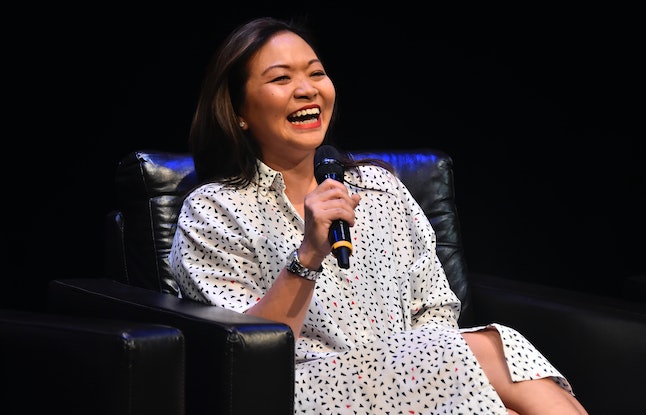 That said, Lim also wanted to challenge the status quo that, for years, has told audiences that Asian men aren’t attractive (see the absurd characterization of Long Duk Dong in 1984’s Sixteen Candles). "There is this narrative in this day and age that only a certain kind of people are seen as successful or wealthy or attractive," Lim notes. And this narrative has had a real, tangible effect on Asian American men; a 2014 study from OKCupid, for instance, found that women "were less likely to start conversations with both Asian and black men."

To change this, Lim says, there needs to be more Asians on screen in the first place. Prior to CRA, the writer notes, she felt that Asians were "largely invisible when it comes to entertainment," and as such, CRA — the first Hollywood movie to feature an all Asian cast in 25 years and one of just four major 2018 releases with Asian protagonists, according to Box Office Mojo — had a lot to prove. 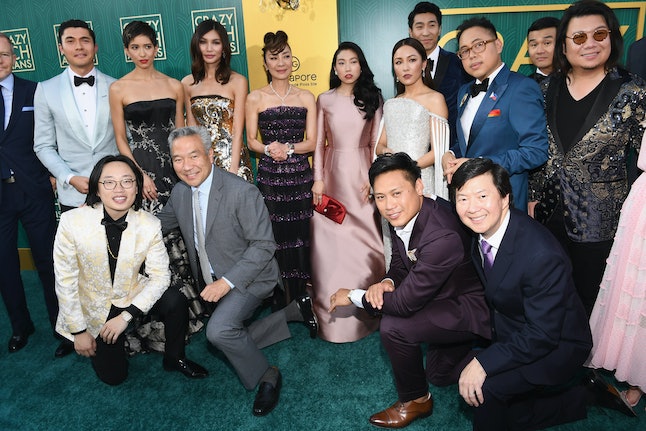 "I was constantly aware, and I’m sure Jon Chu was too, [that] if this didn’t do well, we might not get another movie for another 25 years," Lin recalls. CRA was always going to make history; the only question was whether it would make history as the film that opened the floodgates for Asian stories in Hollywood, or as the box office disappointment that led to another onscreen Asian drought.

Luckily, since its summer 2018 release, Crazy Rich Asians has become the highest grossing rom-com in a decade, according to Box Office Mojo. And it’s not hard to link its success to the manifestation of other projects starring Asian actors. CRA author Kevin Kwan currently has a comedy pilot in the works at CBS, The Emperor of Malibu, with Ken Jeong set to star. Jeong’s onscreen daughter, Awkwafina, also has a show in the works, and CRA‘s leading man, Henry Golding, is set to star in the rom-com Last Christmas, currently set for a November release.

With Crazy Rich Asians, Lim has successfully launched a new era for Asians in Hollywood. And, hopefully that era will be full of dynamic, fully formed Asian characters — including men who just so happen to take their shirts off every once in a while.