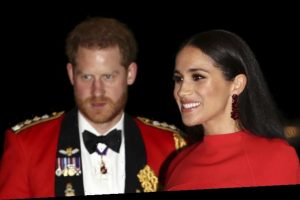 Fans of Netflix’s The Crown shouldn’t expect to see any of the current-day drama regarding the British monarchy on the popular series.

Although the most recent season of the landmark historical drama is revisiting the Prince Charles and Princess Diana era, producers have no plans to feature any of the modern-day controversy surrounding Prince Harry and Meghan, Duchess of Sussex. 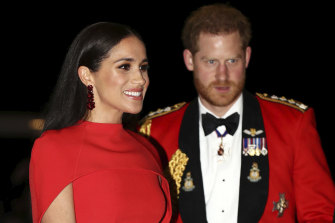 Season six is set to be the final season of The Crown, ending somewhere in the early 2000s.

The Crown creator Peter Morgan has specifically said that the young royals’ romance is simply too recent to reflect on with any clarity in the show, so if they were to be covered onscreen, they would have to wait for the show to be revived in another decade or so.

“I just think you get so much more interesting [with time],” he told The Hollywood Reporter. “Meghan and Harry are in the middle of their journey, and I don’t know what their journey is or how it will end. One wishes some happiness, but I’m much more comfortable writing about things that happened at least 20 years ago.” 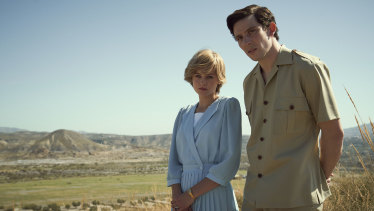 Emma Corrin and Josh O’Connor recently won Golden Globes for their portrayals of Princess Diana and Prince Charles in The Crown. Credit:Netflix

The controversial two-hour interview’s bombshells, including Markle’s admission of suicidal thoughts and the revelation of racist acts inside and outside the palace, has rocked the royal dynasty.

Seems like perfect fodder for a sudsy streaming series.

But according to Morgan, the timing to feature the embattled Duke and Duchess doesn’t quite fit into the current scope of The Crown. He feels the same way about the scandal surrounding Prince Andrew and his relationship with convicted sex offender Jeffrey Epstein.

“I don’t know where in the scheme of things Prince Andrew or indeed Meghan Markle or Harry will ever appear,” Morgan continued. “We won’t know, and you need time to stop something being journalistic. And so I don’t want to write about them because to write about them would instantly make it journalistic, and there are plenty of journalists already writing about them.”

“You need to also allow for the opportunity for metaphor,” Morgan continued. “Once something has a metaphorical possibility, it can then become interesting. It’s quite possible, for example, to tell the story of Harry and Meghan through analogy and metaphor, if that’s what you want to do. Because there’ve been so many examples in the past, whether it’s Wallis Simpson or Edward VII, or whether it’s Diana and Prince Charles.

“There have been plenty of opportunities in the past where there have been marital complications. There’ve been wives that have been married into the royal family that have felt unwelcome and that they don’t fit in. So there are plenty of stories to tell without telling the story of Harry and Meghan.”

The final two seasons of The Crown are expected to cover the royals up to the early aughts. Season four started in 1979 and ended around 1990. There are two more seasons to go before the series concludes.