In creative terms, it might go down as one of the most ambitious gambles in television history: to recast the world's most successful drama series after just two years.

The Crown, Netflix's fabulously expensive and critically acclaimed royal soap opera, is a textbook case of a hit show. With House of Cards it confirmed Netflix's place at the apex of content creation in the streaming age and made superstars of its actors: Claire Foy, Matt Smith and Vanessa Kirby, who played the Queen, Prince Philip and Princess Margaret.

But as the series continues its slow unfurling of royal family history, the highly anticipated third season shifts the story into the 1970s, requiring that Foy, Smith and Kirby be "aged up" and replaced with three new actors, Olivia Colman, Tobias Menzies and Helena Bonham Carter. 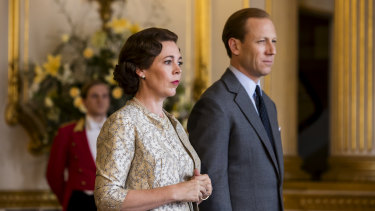 Olivia Colman and Tobias Menzies in the third season of The Crown.Credit:Netflix

The impact of those changes, and the gamble in swapping out the perfect cast, is lost on no one, least of all Colman on whose head rests the new crown: "It's horrendous," says the 45-year-old actress of taking on the role. "Everyone loves Claire, so I have got the worst job in the world at the moment." 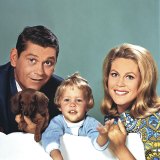 Dick York and Elizabeth Montgomery in Bewitched. He was replaced by Dick Sargent.

In truth, television has and long and rich history of recasting key roles, though those transitions have at times proven to be challenging, both for productions and for the audience.

As far back as the two Darrin Stephens' in the legendary '60s sitcom Bewitched – actors Dick York and Dick Sargent – audiences have sometimes been startled to find the same character with a different face when they tuned in the next week. The 1980s-era supersoap Dynasty replaced oil family heirs Fallon and Steven Carrington, and fans of sitcom The Brady Bunch even christened their recasts Fake Jan, Fake Cindy and Fake Marcia, when those much-loved actors were replaced in The Brady Bunch Variety Hour, A Very Brady Christmas and The Bradys.

And Australia is no stranger to the gimmick. Iconic '70s soap Number 96 recast its leading women Helen Sheridan and Bev Houghton and Neighbours swapped Darius Perkins for Jason Donovan in the role of Scott Robinson when it switched from Seven to Nine.

In addition to Colman, Menzies and Bonham Carter joining The Crown for its third season, Marion Bailey replaces Victoria Hamilton as the Queen Mother, Derek Jacobi replaces Alex Jennings as the Duke of Windsor and Ben Daniels replaces Matthew Goode as Lord Snowdon. (Only one actor escaped the purge: John Lithgow, who returns as the elderly Winston Churchill.)

The show's creator, writer and producer Peter Morgan says he had "no doubts" that Colman would be able to step into the role which Foy had turned into a winner with both audience and critics. 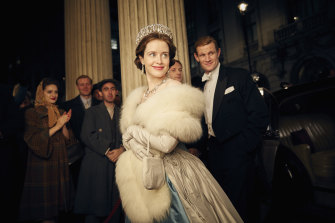 Claire Foy and Matt Smith in a scene from “The Crown”.Credit:Netflix

"It was just amazing to watch," Morgan says. "The new cast didn’t bother me, it was how to make the new cast feel like it was the same show. I just wanted to feel it was seamless and I think it does."

One of the central narrative elements of the series is how it weaves the family soap opera of the Mountbatten-Windsors into the larger political and cultural stage of the era. "[It is] the biggest challenge but also the biggest reward of doing the show," Morgan says. "That's what it offers a writer, the ability to lurch between the intimate and the personal and the political and the epic."

It also holds much of its power in the notion that while the royal family are "nothing like us, [they are also] just like us," he adds. "Theirs has been an enormously successful marriage and we know about some of the challenges it faced. At some point you're left with the prospect of actually writing the sort of conversation that would happen in many marriages."

The series depends both on Morgan's deep and rich knowledge of royal minutiae, but also on conversations he has with sources within the machinery of the British monarchy, who give him insight into the day-to-day detail of royal lives. "It gets easier with time, more and more people with deep, close and historical links to the most senior members of the royal family are reaching out to talk to me," he says. 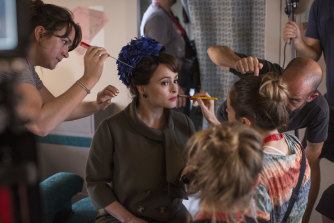 Helena Bonham Carter is transformed into Princess Margaret for season 3 of “The Crown”.Credit:Netflix

The new cast will stay with The Crown for its third and fourth seasons, after which it is widely acknowledged that the producers will recast the key roles before advancing the story to the 1990s and 2000s. There is already speculation that Helen Mirren could then return to the role she made famous in Morgan's 2006 film The Queen. By the time of The Crown's fifth season the now 74-year-old Mirren would be perfectly positioned to return to the role of the older monarch.

Mirren is a fan of The Crown, says Morgan. "She loves the show," he says. "She thought there was nothing left to say [about Queen Elizabeth], and I think she’s really surprised."

But the last word belongs to Colman's Elizabeth, who has this to offer in the new series: "Age is rarely kind to anyone. Nothing one can do about it. One just has to get on with it."

The literal changing of the guard might have become the elephant in the room for the third season of The Crown (Netflix) but for the fact that writer Peter Morgan opens the season with the issue front and centre: his newly installed Queen Elizabeth II (Olivia Colman) surveying a set of postage stamps of the younger and older queens on easels: effigies of Claire Foy's Queen and her own. It is, offers an obsequious underling, an elegant reflection of Her Majesty's transition from young woman to … "Old bat?" offers Colman's Elizabeth.

The third season of The Crown is a rollicking ride, diving headlong into a new election, a new prime minister and a new scandal, overshadowed by the final days of the legendary Winston Churchill. Change is coming, a seemingly generational shift in the wider world though little of it seems to penetrate the royal inner circle.

Morgan has an eye for camp as much as pomp, revelling in Colman's droll take on the Queen, juxtaposed with Helena Bonham Carter's positively flamboyant turn as Princess Margaret, perched in her bed with a pillow that says "It's not easy being a princess" and asking of a new maid where her predecessor – "the fat one" – has gone.

The real majesty of Morgan's not-so-fictional royal world lies in the power of illusion. Colman's Queen looks no more like the real one than Foy's did, and yet around both he weaves a mystique reminiscent of the real royal mystique which manages to be both hypnotising and thrilling.