Home » Lifestyle » The Hollow Crown review: Ambition rewarded, with the promise of more to come

The Hollow Crown review: Ambition rewarded, with the promise of more to come

Calling them "history" or "chronicle" plays makes them sound as dry as an empty sherry glass. In fact they fizz with beauty, comedy, drama and humanity, even as they evade neat categorisation​ as tragedies or comedies. 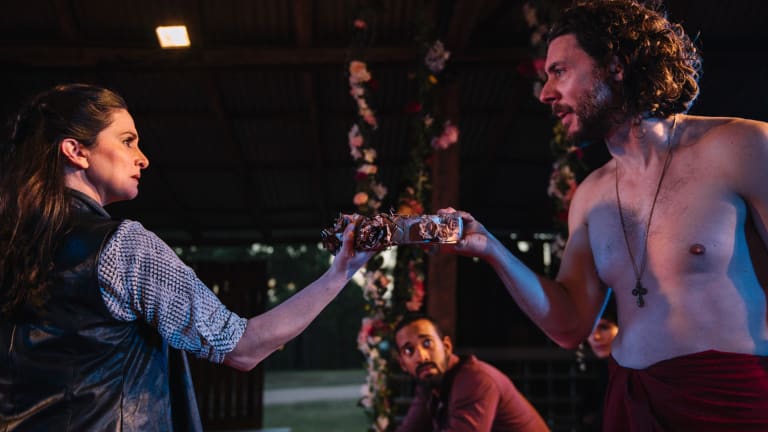 The components of the first part of Rose Riot – Sport for Jove​ celebrating its 10th anniversary with its most ambitious undertaking, yet – are unique works in Shakespeare's canon.

Richard II was his only attempt to approximate a tragedy via such lyrical verse. The two parts of Henry IV entwine political drama with his highest comedy, and Henry V is a pragmatic playwright's patriotic piece, albeit cloaked in heavy irony.

For this first part, The Hollow Crown, director Damien Ryan stripped down more than 10 hours of drama to just under four (including an interval). Probably it should lose another 30 minutes, purely because in Bella Vista's adversarial environment, too much dialogue can be whisked away on the wind – especially pertinent when the plays have been stitched back together in unfamiliar ways, thereby demanding even greater audience concentration.

Four hours would not be too long were every word readily heard. In fact I found the hour of Richard II rushed: not in Ryan's cutting, which was astutely done, but in the delivery. In purely poetic terms it is one of the four most gorgeous works in the canon, joining Romeo and Juliet, A Midsummer Night's Dream and Antony and Cleopatra.

But the verse, specifically that spoken by Richard (Tim Walter), needs to be savoured; yearns to linger in the mouth of the speaker. Walter's less effete, less ritualised​, more naturalistic characterisation was valid, but we weren't allowed to wallow with him in his bottomless well of self-pity; weren't given time to understand that one reason Richard II fails to function as a tragedy is that, for all its aesthetic beauty, his verse keeps us at arm's length from his experience.

When we swung into Henry IV Bron​ Lim's​ gender-swapped Falstaff immediately lit up the stage like a red nose on a reindeer. If she failed to nail the epicentre of Falstaff's sprawling intelligence, she certainly hit the sweet spot of the character's uproarious, often childlike and essentially benign fun.

Without the warmth of the bond between Hal and Falstaff evident in the performances, the upshot was that Falstaff's speech pleading to "banish not plump Jack …" during the play-acting in the tavern (anticipating later events) lacked the merciless sadness it should have.

If Drew Livingston's​ Hotspur took the character's headstrongness​ to an almost frenzied extreme, Brittanie​ Shipway was moving as his love-struck, bewildered and ultimately bereaved young wife. Christopher Tomkinson​ made the chorus in Henry V a riveting narrator, and Winstock's​ king rose to much more persuasive heights than her Hal, as the one-time reprobate transformed herself into a charismatic (if ruthless) leader. This is to mention just a handful in a cast of 21, several of whom were founder members come back to the fold.

The battle scenes – both Shrewsbury in Henry IV and Agincourt​ in Henry V – were brilliant realised: stylised, monumental, fearsome. The design, meanwhile, devised by Anna Gardiner and Ryan, pursues the many cues across the plays in which England is a garden – an Eden, almost, albeit a brutal one.

The work will undoubtedly tighten further in terms of both text and pacing. By the Leura season it should be riotous, indeed.

Part 2 of The Hollow Crown will be reviewed tomorrow