Home » Lifestyle » The lessons learnt from my worst travel mishaps

The lessons learnt from my worst travel mishaps

When I was in high school, one of our teachers took us camping in the mountains. On the first night she fried up various mushrooms we'd foraged in the forest – and pretty soon we were all hallucinating. It gave a very different meaning to the term "school trip".

But this misadventure did whet my appetite for other kinds of trips. 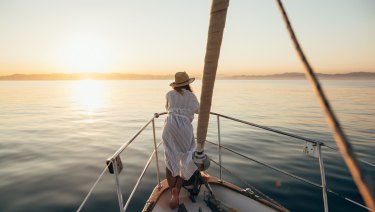 Aussies are great travellers; we live so far away from the rest of the world that when we go walkabout, it tends to be epic.Credit:Stocksy

Aussies are great travellers; we live so far away from the rest of the world that when we go walkabout, it tends to be epic. All my pals are either backpacking around Brazil, hitching to the Himalayas or doing a little light gorilla-cuddling in the Congo.

As a travel writer, I've been lucky enough to explore the world from Kakadu to Kathmandu. (Place-dropping, a new art form!) While mostly enthralling, there have also been many mishaps.

My most terrifying experience was en route to a family holiday in Mauritius when two of our three engines failed over the Atlantic. We had to make an emergency landing in the Azores, a windswept bit of rock in the middle of the raging ocean. After tongue-kissing the tarmac, 500 passengers made the simultaneous realisation that there was only one tiny hotel. The ensuing scramble resembled the desperate dash for the last helicopter out of Saigon.

It wasn't that pleasant being caught up in a cyclone in the Caribbean, either. The coconut concussion was bad enough but much worse was being forced to share a bunker with 40 random people badly harmonising Kum Ba Yah for days on end.

My bodysurfing adventure in Dubai is only funny in retrospect. In reality, it was a little nail-gnawing. Although Dubai is in a traditional Muslim country, its private hotel beaches allow wanton Westerners to frolic in teeny bikinis and budgie smugglers tight enough to detect a man's religion.

I was wearing a hot-pink string bikini … which was fine, until a current swept me out to sea. I finally spluttered to shore about a kilometre further down the coast, to find every female shrouded in black burkini ensembles. The conservative locals gawked at me, en masse, as though I'd just beamed down from Planet Infidel. I smiled, waved – then ran for my life back to Touristville to book a ski holiday.

My worst vacation ever was a make-or-break trip with a boyfriend to the Maldives. It rained solidly for the whole fortnight. Cooped up at close quarters, we ran out of polite conversation by day two; on day three, during an argument, he confessed all his affairs. Mind you, an island holiday did at least offer a unique opportunity to drown my sorrows – if I held his head under long enough.

My honeymoon didn't fare much better on the fun-o-meter. We'd chosen an Amalfi Coast resort so exclusive that only the tide could get in. It was deliciously romantic … until my brand-new husband fell down a cliff while exploring a ruin. Honeymooners are often plastered, but preferably not from the knee down. My hobbled hubby spent the rest of the week in hospital with his leg in plaster, leaving me to brave the gropers of Pompeii. (Italian men at the time had a Berlusconi-esque gift of the grab.)

Now, aged 60, I'm starting to tick off my bucket list, all of which involves travel. My ultimate dream destination is the Galápagos Islands: how lovely to be in a place where there are creatures even weirder than I am!

But wherever you're roaming, here are my top travel tips.

1) Don't eat foraged mushrooms. Not ever.

2) Always try local delicacies. In the Brazilian rainforest, I even ate fried piranha. Hey, it was better to eat it than have it eat me! It's like dieting from the inside.

3) Never travel anywhere without a good book. Then, if there's a coup or a cyclone, you can simply surf your brainwaves.

This article appears in Sunday Life magazine within the Sun-Herald and the Sunday Age on sale February 24.