Home » Lifestyle » The love of art and desire

The love of art and desire 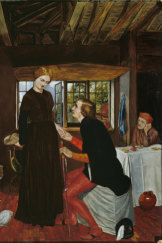 The passion, pleasure and pain of love has always inspired the arts. From ancient cave paintings to modern rom-coms, this most powerful emotion has been the inspiration for entertaining viewing, touching music, tragic storytelling and visual works of great beauty throughout the ages.

It's almost impossible to imagine art gallery walls without dramatic paintings of love and romance. Depictions of romance have also often reflected the attitudes of the time, as is starkly demonstrated in a new exhibition at the National Gallery of Australia, Love & Desire: PreRaphaelite Masterpieces from the Tate.

In the mid-1800s, a group of young artists rebelled against the pervasive style of the period and started painting brilliantly vivid depictions of romance. They created a new artistic genre that combined medieval romanticism with modern life – giving it a sexy and sometimes raw appeal. Evoking the spirit of early Renaissance, these Pre-Raphaelites, as they became known, drew inspiration from great love stories, both real and fictional.

The themes of love and desire explored by the Pre-Raphaelites often revealed Victorian conceptions of women. Among these representations, the most popular subject was the "fallen woman", portrayed as giving in to seduction and losing her innocence.

Within this collection – most of which has never been seen in Australia before – William Holman Hunt's The Awakening Conscience depicts the "fallen woman" through a sympathetic lens by expressing her struggles, while John Everett Millais' Ophelia shows the tragic death of the Shakespearean heroine driven mad after her lover, Hamlet, murdered her father. 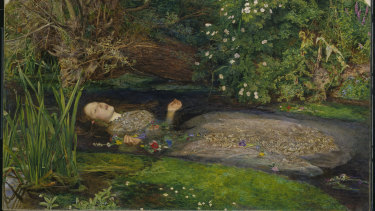 The fragility of love and its connection with feelings of loss and fear also inspired artists such as Arthur Hughes and Philip Hermogenes Calderon, both represented in this exhibition.

In an era where we're more likely to see depictions of romance through a filtered couple selfie on Instagram with an #ilysm hashtag, stepping back in time offers us compelling insights into love and lust. While manners and mores may change over time, the complexity of these emotions remains the same.

Love & Desire features 40 of the Tate's most famous and best-loved works alongside 40 loan items from other British and Australian collections. The exhibition is showing at the National Gallery of Australia, Canberra, until April 28.

This article appears in Sunday Life magazine within the Sun-Herald and the Sunday Age on sale February 10.