Home » Lifestyle » The making of the Joshua Tree: Behind the scenes of U2’s spectacular live tour

The making of the Joshua Tree: Behind the scenes of U2’s spectacular live tour

When U2 first toured their Joshua Tree album in 1987, the year of its release, they played 109 shows to 3.17 million people worldwide, grossing a little over $US56 million in ticket sales. It was by any measure a huge success.

But the 30th anniversary tour that has finally arrived in Australia after a two-year hiatus dwarfs it both as production and money earner. 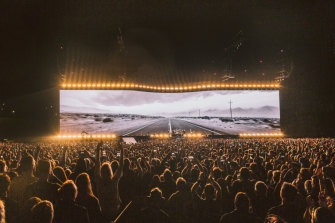 The band is dwarfed by the massive screen, filled with short movies shot by Anton Corbijn.Credit:Dara Munnis

In 51 shows throughout 2017, the tour grossed $US317 million, an average of $6.3 million per show. The final leg, which kicked off last Friday in Auckland, will add 15 more dates and many tens of millions to that haul before winding up in Mumbai, ensuring that the Irish four-piece will enjoy a fourth decade as one of the top-grossing live acts in the world.

But with apologies to Bono and Co, the true star of the show is a massive image wall that promoter Live Nation insists is "the largest LED screen ever used in a touring show".

It measures 61 metres across and 14 metres high, with an abstract protrusion at the top meant to represent the limbs of a Joshua tree, a species of yucca native to the Mojave desert (it was so named by Mormon settlers in Utah, who thought the silhouette of the plant against the blue desert sky resembled the praying Joshua, arms outstretched in supplication to God).

Standing behind that screen in Auckland, its scale is overwhelming. There are 1040 individual video panels interlocking on a lightweight-metal grid, the whole thing suspended from a couple of tall steel towers that are, designer Willie Williams insists, the true heroes of the production. 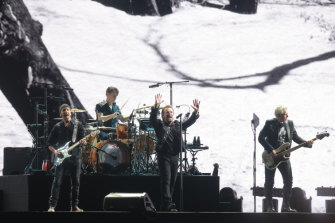 The band performs the Joshua Tree album in its entirety, to a backdrop of stunning images.Credit:Garry Brandon

"Traditionally, you build a big lump of scaffolding and drag a video screen up the front," he says. "This is pretty much self-supporting, so the gigantic rear metal structure is what's holding it up but there's very little in between."

There are two versions of the metal structure, leapfrogging each other as the show moves from place to place; it takes about two-and-a-half days to set up. But what Williams calls the universal production – "the screen, the PA, everything" – can be erected in about 10 hours, and disassembled in a mere four.

"You want to see it move," says Williams, who has been working with the band since 1982. "It's incredible." 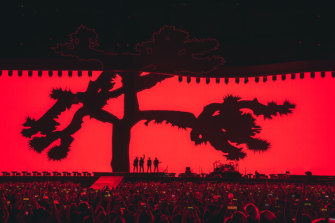 The Joshua Tree tour features the largest cinematic screen ever used for a concert.Credit:

The biggest innovation is the metal rig at the back created by Tait Towers, the company set up by Australian Michael Tait in the heart of Amish Country, where stage designs for everyone from Taylor Swift to Lady Gaga come to life.

"Whenever there's a big screen there's usually all this stuff in front of it to hold up the PA and lights," Williams explains. "Here all the sound and lights and everything is cantilevered over the top of the screen, which means you get a completely unobstructed picture.

When U2 first toured Australia in 1984, the fanciest bit of stagecraft involved Bono grabbing hold of a spotlight and shining it on the audience (it's a trick he repeats in this show). Now that massive screen is awash with stunning imagery, much of it shot by the Dutch photographer-turned filmmaker Anton Corbijn, whose images graced the sleeve of the Joshua Tree album 32 years ago.

The band have lost none of their ability to fill a stadium with their muscular-yet-delicate sound, but it's the visuals that most command attention.

Increasingly this is the way with large touring shows: music alone does not the killer gig make. And the killer gig is where the acts make their money.

In 2017 Billboard reported that U2 was the top money earner of the year, taking home $54.4 million, of which $52 million came from touring.

And despite the resurgence of revenues from recorded music thanks to streaming, the live tour circuit is in no danger of fading just yet. 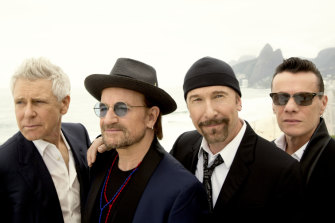 "When I started doing global tours in the late-'80s there were maybe 15 to 18 countries that were part of a tour,” says Arthur Fogel, CEO of Touring for Live Nation, the company that has done more than any other to develop the market for this kind of live music spectacle. "Now there's 60-plus."

"When I started it was really about touring to sell records," he adds. "I could never have imagined then that touring would generate such revenue for artists. It's great."

The writer flew to New Zealand as a guest of Live Nation.