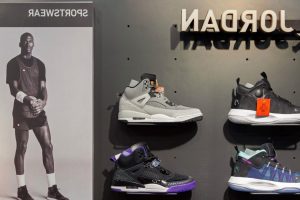 Sure, there have been other athletes who have attempted to go the same route as Jordan with their business endeavors, like Charles Barkley, Carmelo Anthony, Lebron James, Kevin Durant, and the late Kobe Bryant. But the numbers don’t lie, and it appears that even after retiring from the NBA, MJ’s wise investments awarded him with way more wealth and fortune than he ever had prior to his retirement.

Among the multiple streams of income Michael Jordan has invested in, and he’s best known for his Nike Air Jordan line of basketball sneakers. Athletic and casual clothing. Honestly, the name “Jordan” may not have been as popular without it. Owned by Nike, the Air Jordan brand was founded in Chicago in 1984 and, in 2015, was turning $100 million in Nike royalties alone. By 2020, he was grossing over $4 billion annually for Nike while earning $150 million for himself, making the Air Jordan sneaker and MJ by extension one of the most successful marketed athlete-owned brands of all time.

Every investor knows that the one product that will always sell is food. If you’re starving, it’s guaranteed that you’ll buy something to eat before buying a shirt to wear. And that’s probably the reason The Jump Man Jordan invested in both. He is the co-founder of a deluxe waterfront restaurant that was opened in 2018 called 1000 North in Jupiter, South Florida. Its exact location is in the Jupiter Harbor Marina, which means it can be accessed by either marine craft or by vehicle. But the appetite for success doesn’t stop there for the basketball Hall of Famer. He also owns three more Michael Jordan Steakhouses. One in Chicago, another in Connecticut, and one more in Washington, all upscale restaurants serving exceptional American cuisine.

It’s no surprise that the former Chicago Bulls basketball star owns a private jet, a luxury not even the richest basketball players of today can boast. After all, Jordan can afford to bypass the lines at the airport ticket counters since he is has reached billionaire status, making him the first billionaire athlete ever. He purchased the Gulfstream G550 jet for $61.5 million after customization, which showcases the classic Jumpman logo alongside a feature of his jersey number, number of championship titles, and his initials, M.J., on the body of the plane. In 2017, he adorned the body of the jet by painting it over in the Air Jordan elephant print design, giving it the appearance of a flying sneaker. But MJ would probably have it no other way.

Flying in style on board his own jet plant was a decision Jordan made willingly, but it is said that the G.O.A.T. doesn’t like his boat to be rocked. But with a little encouragement from his second wife, Yvette Prieto, he purchased his first yacht for $21 million, which he nicknamed “Mr. Terrible.” Perhaps the name was meant to reflect his intense entrepreneurial spirit. Who knows? But he might have adopted a liking for the sea after all since he purchased an $80 million yacht he named “Joy” shortly after. Besides being much more expensive, she was larger in size than Mr. Terrible, an estimated 229 feet in length with five decks and a basketball court so Mr. Jordan could stay in shape while at sea.

Every billionaire athlete with their own pair of wings and marine vessels needs a mansion to rest in; better yet, if you have four! Michael Jordan owns four multi-million dollar estates located in different states all across America, beginning with one in Utah, another in Chicago, and two in Charlotte, North Carolina. What’s more, is that they’re all customized to his specific taste, which is probably why they’re still up for grabs on the real estate market. His 32,000 square foot Chicago property has been listed on the market to be sold for $19 million, while his Utah property has been listed for $7.5 million since 2019.

If you were impressed by the luxurious seacraft and G550 jet plane, you’d be blown away by Michael Jordan’s collection of flamboyant luxury vehicles. Can you blame him, though? A man considered the greatest player of all time by the National Basketball Association needs to roll in style no matter what habitat he chooses. From the start of his career in the 1980s and into the 2000s, Jordan has purchased some balling sports cars like the Chevrolet C4, a Porsche 930 Turbo Cabriolet, a 1991 Toyota Land Cruiser, an Aston Martin, and his most recent beauties: a McLaren Mercedes SLR 722 and a Bugatti Veyron Sang Noir.

If there are three things for certain MJ loves, it’s basketball, big business, and fast cars. His car collection above is a proven testament to that. Another thing we have learned about Jordan is that he’s a professional, and once he has a passion for something, he finds a way to make it turn over a profit. The same can be applied to his love for sports cars. The rumors of in the summer of 2020 were confirmed when Michael Jordan and minority partner Denny Hamlin announced later that year in September that they would be forming their own Cup Team that would be competing professionally in 2021. The NASCAR team was named 23X1 Racing, after MJ’s jersey number during his basketball career.

You can take the player out of the game, but you can’t take the game out of the player. Ever since his prime while playing for the Chicago Bulls from 1984-1993, the man recognized as the G.O.A.T. has proved his world-class skill to the world. And even after his retirement from the Washington Wizards in 2003, rest assured that his passion for basketball never died. So much so that he became a 97% owner of the Charlotte Hornets basketball team in 2019. According to Forbes, before MJ bought the team, they were generating $39 million off of $240 million in revenue. After he purchased it for $180 million, their worth increased to $1.5 billion after playing only three playoffs.

Was it forgotten to mention that Michael is a prudent businessman who always knows the right investments to make? It’s as if whatever he touched turns to gold! In March 2021, he became one of the newest members of a $305 million investment in Dapper Labs. Dapper Labs is the startup company that birthed the NBA Top Shot, which is a not-for-profit (NFT) platform that uses blockchain technology to allow users to trade virtual basketball cards in the form of their favorite players’ best clips, called “moments” Alongside MJ as new investors are Kevin Durant, Will Smith. and rapper 2 Chainz. Their combined investments increased the value of Dapper Labs to $2.6 million.

In 2019, MJ did it again when he co-founded Cincoro Tequila with Jeanie Buss, Wes Edens, Emilia Fazzalari, and fellow billionaire and majority owner of the Boston Celtics Wyc Grousbeck. The name “Cincoro” originated from a combination of the Spanish translation for “five” (Cinco) and “gold” (oro) and was created with the intention of introducing a smoother, more refined variety of tequila compared to what’s already on the shelf. Only in July 2021 was the CEO of Cincoro Tequila, Emilia Fazzalari, rejoicing over the sales of the tequila, which more than tripled since the previous year. It appears that Michael Jordan has struck gold again with Cincoro.