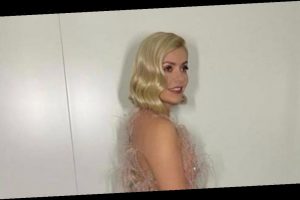 Seeing as we’re now in Lockdown 3.0, we’ve had more than enough time on our hands to binge watch the new shows on streaming services such as Netflix and Amazon Prime.

However, sometimes we need a break and venture to “normal” television for our much loved Saturday or Sunday evening programmes.

Shows such as BBC’s The Voice and ITV’s hit shows like Dancing On Ice and Britain’s Got Talent are some of the public's favourites.

Shows such as these have always been ones that the nation loves tuning in to.

In recent years, as much as we love watching to see what happens, our eyes are occasionally sidetracked by the revealing outfits that the presenters or people that are appearing may wear.

We thought we would take a look back at just some of the most complained about outfits to grace our screens.

However, after the show it was said that Ofcom received around 350 complaints about Rufus Hound’s political remark, but as well as this they also received some about Holly’s dress.

Another stunning lady to always spark interest with her outfit choices is none other than television and radio host Amanda Holden.

On one of Britain’s Got Talent shows in 2020 saw Amanda wear this flawless burgundy dress by designer Suzanne Neville.

It was reported that Ofcom received 131 complaints over the nude illusion.

Back in 2017 saw another one of Amanda’s outfit choices become one of the most complained about moments of the entire year with 663 people registering their complaints.

Taking to one of the live shows the blonde babe wore this beautiful dress by designer Julien Macdonald.

The dress was heavily embellished and a deep plunging neckline that some thought was a bit too much.

2020 saw Nicole Scherzinger team back up with hit girl band The Pussycat Dolls and with this brought their new single ‘React’.

Taking to the stage of The X Factor, the girls strutted their stuff in mesh bodysuits and some 400 viewers were not happy.

Even though it was for a stage performance, was it too much?

Throwing it back all the way to 2010 when Rihanna and Christina Aguilera also appeared on The X Factor finale.

The brilliant singers took to the stage to perform their new songs and their performances triggered Ofcom to receive nearly 3000 complaints.