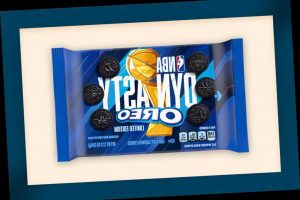 On its surface, the news doesn't jump off the page: Mondelez International—one of the largest food conglomerates in the world—announced today that they've inked a multi-year partnership with the NBA. Two big companies coming together. But once you realize all the brands Mondelez owns, the idea of NBA-branded products becomes more intriguing: Ritz Crackers, Sour Patch Kids, Chips Ahoy!, and Trident gum, just to name a few.

And to kick things off, Mondelez is launching an NBA edition of possibly their best known brand: Get ready to chow down on limited-edition NBA Dynasty Oreo Cookies stamped with the logos of six of the league's most prolific teams. Just look for the packs with the golden Larry O'Brien Championship Trophy on the front.

Set to arrive at retailers nationwide later this month, packs of NBA Dynasty OREO Cookies will have "six unique embossments" on the outside of the chocolate cookie sandwiches featuring the logos of "the greatest dynasties in NBA history." Yes, here's where you might be disappointed depending on your allegiances: The chosen teams are the Boston Celtics, Chicago Bulls, Golden State Warriors, Los Angeles Lakers, Miami Heat, and San Antonio Spurs. (I'm sure social media will be very excited you hear any complaints you have, Pistons fans!)

Along with these new cookies, the two brands will also be launching their partnership with a "Taste Greatness" sweepstakes for the chance to win a grand prize trip to NBA All-Star 2022. You can go to TasteGreatnessVIP.com for more details.

And Oreos are just the beginning. More products are slated to get basketball-themed crossovers—and not just for the NBA, but also with the WNBA, NBA G League, NBA 2K League, and USA Basketball. "Creating unique products and consumer promotions with Mondelez International's iconic collection of brands is going to be an enjoyable way to bring our partnership together for NBA fans," Dan Rossomondo, the NBA's Senior Vice President, Head of Media and Business Development, said.

Hopefully, we'll finally learn who would win in a pickup game: the Delaware Blue Coats or the Sour Patch Kids?

This story originally appeared on foodandwine.com