Home » Lifestyle » The New ‘Chilling Adventures Of Sabrina: A Midwinter’s Tale’ Trailer Will Creep You TF Out

The New ‘Chilling Adventures Of Sabrina: A Midwinter’s Tale’ Trailer Will Creep You TF Out

Netflix’s Chilling Adventures of Sabrina is a hit by all metrics, including some the streaming service would rather not let fans know about. Netflix is famous for refusing to release any sort of viewer numbers for its shows, preferring to let those on the Nielsen rankings wonder how broadcast shows compare to streaming audiences. But this has merely created a cottage industry of outside analysts, the latest of which ranks Sabrina as the second most watched Netflix show this fall. No wonder it’s getting a Christmas special! This new Chilling Adventures Of Sabrina: A Midwinter’s Tale trailer for the upcoming holiday episode promises to be as spooky as the Solstice allows.

It wasn’t long ago people celebrated Christmas with horror and ghost stories. Think of the famous Dickens tale A Christmas Carol, for instance. It’s a story where a man is visited by not one but four ghosts over the course of Christmas Eve, first Marley (who is dead as a doornail, let’s not forget), and then the Ghosts of Christmases Past, Present, and Future, the last of which scared the bejeezus out of me the first time I saw it.

Chilling Adventures of Sabrina may be a far more modern story than anything Dickens could come up with, but it doesn’t mean it won’t be aiming for a little fright music.

Check out the latest trailer.

The good news is Sabrina seems to be getting along again with her friends, despite having signed her name in the Book of the Beast at the end of last season. She’s even trading presents with Harvey! And she’s introducing Rosalind to the ways of witch life, a thing her friend has a lot of interest in since fans assume she’ll be gaining more of her "cunning" in the upcoming Season 2. The Weird Sisters also seem to have gotten with the spirit of the season, at least temporarily.

Meanwhile, there are ghosts, goblins, and a Santa who looks like he’s trying to kidnap small children. Obviously, he should get with Miss Wardwell’s method and just bite their cute little voodoo gingerbread heads off. But I suppose that’s the difference between the types who insist on inviting jolly fat men down their chimneys every year and those who wisely light Yule Logs to keep them away. 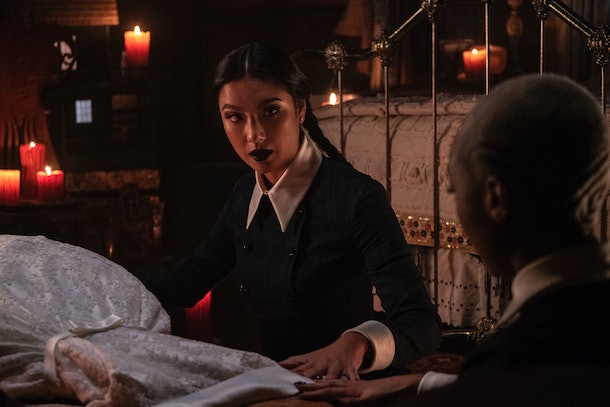 With everyone getting in on the holiday action, viewers are hoping at least a little momentum will be made on some of the loose ends left dangling at the end of Season 1, such as Father Blackwood’s baby, or perhaps Ambrose’s growing relationship with Luke. Either way, the promotional images suggest fans will get a good dose of the Weird Sisters, who probably have ways to celebrate the Solstice that would make Sabrina blush.

Whatever does happen, the holiday special is only a single episode hour. Once it’s come and gone, fans will have to settle in again for a long wait until Chilling Adventures of Sabrina Season 2 comes along in the spring.