Home » Lifestyle » The power to answer back: 2020 Sydney Biennale at the cutting edge

The power to answer back: 2020 Sydney Biennale at the cutting edge

Artist S.J. Norman remembers being the only child of Aboriginal descent in her local primary school when her teacher told the class that Aboriginal people were all but extinct.

''I was eight-years-old at the time,'' she recalls. ''I didn't have the power at the time to answer back to that narrative." In her diverse artistic practice, Norman has found different ways to respond to that historical ignorance. 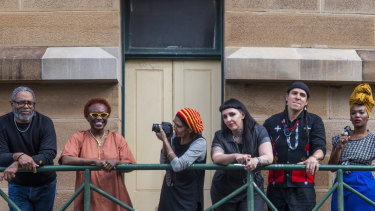 Norman, who works between Berlin, London and Melbourne, is one of 33 creatives and collectives developing work for the 22nd Biennale of Sydney, the first show in its 46-year history to exclusively consider the experience of First Peoples across the world. All this in a year in which Australia marks the 250th anniversary of the Australian east coast voyage of Captain James Cook.

The Biennale is led by artistic director Brook Andrew, the first Indigenous Australian artist appointed to the role, who has taken a single word of the Wiradjuri people of western NSW to develop a culturally sensitive exhibition of international art.

Nirin means edge in Andrew's mother's tongue and is the title of the three-month-long show which opens March 14 at the Art Gallery of NSW, Artspace, Campbelltown Arts Centre, Cockatoo Island, Museum of Contemporary Art and the National Art School.

Not having the same usage as in English Nirin, explains Andrew, more closely approximates the idea of the ''cutting edge''.

That means challenging dominant Eurocentric narratives and shining a light on spiritual sites, ceremonies, rituals and histories from around the world.

''Because of coming from Australia and my mixed cultural heritage I've always been in my own centre and it's about empowering other artists and creatives and interdisciplinary practitioners and communities to see how they connect,'' he says.

While the Biennale program was not intended to highlight next year's Cook commemoration it was inevitable that the different stories told within would form a counterpoint to the ''very problematic'' narrative of exploration and discovery.

''It is contested history, it is contested land and there was genocide in Australia, we can't deny it, the history books say it and I think that's why there is so much intergenerational trauma,'' Andrew said.

END_OF_DOCUMENT_TOKEN_TO_BE_REPLACED

END_OF_DOCUMENT_TOKEN_TO_BE_REPLACED
We and our partners use cookies on this site to improve our service, perform analytics, personalize advertising, measure advertising performance, and remember website preferences.Ok