Home » Lifestyle » 'The Princess Diaries' Cast: Where Are They Now?

'The Princess Diaries' Cast: Where Are They Now? 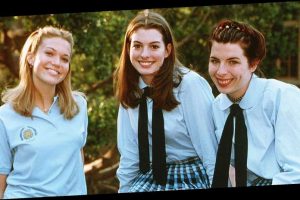 “Me? A princess? Shut up!” It’s been years since The Princess Diaries hit theaters, but fans will never get tired of the Disney movie’s royal charm.

Released in August 2001, The Princess Diaries was an unexpected hit, raking in more than $165 million worldwide. Only 18 years old at the time, the comedy marked Anne Hathaway‘s big-screen debut. While Drew Barrymore, Kirsten Dunst and Brittany Murphy had also been considered for the role of Mia Thermopolis, late director Garry Marshall was convinced to take a risk on Hathaway because his granddaughters thought she had the most “princess-like” hair.

As iconic as the movie has become, the Dark Knight Rises actress previously admitted to feeling restricted by the playful part.

“Of course, after Princess Diaries, I was labeled a good girl, and for the first eight years of my career I had to fight to get any other kind of role,” she told Glamour in December 2012. “But I like fighting for a job, actually. Once you get it, you feel like you’ve emerged victorious from the scrap and you’re like, ‘OK, this one’s mine. Did it. Done.’ And it’s not based on how many Twitter followers I have: zero. My acting got me this role. So it feels pure to me.”

Hathaway returned to Genovia for the 2004 sequel, Princess Diaries 2: Royal Engagement, alongside original cast members Julie Andrews, Heather Matarazzo and more. To this day, Disney lovers are desperate for a third chapter of Mia’s story.

“There is a script for the third movie,” Hathaway teased during an appearance on Watch What Happens Live With Andy Cohen in January 2019. “I want to do it. Julie wants to do it. Debra Martin Chase, our producer, wants to do it. We all really want it to happen. It’s just we don’t want to unless it’s perfect, because we love it just as much as you guys love it. It’s as important to us as it is to you, and we don’t want to deliver anything until it’s ready.”

Three months later, Andrews chimed in on the rumors, adding that she would be happy to return to her throne at the right moment. “I’m not sure if it’s the right timing, but I think to work with Annie would be lovely again, and sure I’d be up for it,” she said on The Talk.

Scroll down to see where the cast of The Princess Diaries is now!