Home » Lifestyle » ‘The Queen’s English’: Top tips and vocabulary to sound like a royal – ‘anyone can learn’

‘The Queen’s English’: Top tips and vocabulary to sound like a royal – ‘anyone can learn’ 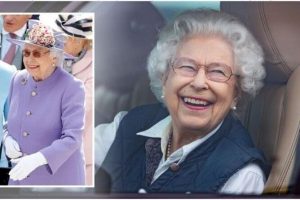 Queen says she 'can't move' as she holds in-person audience

There is no denying there is a huge obsession with the Royal Family, and royal fans always want to know the lifestyle habits of the Queen and the rest of her family. In honour of the Queen’s upcoming celebration, language learning marketplace Preply has revealed the 10 words any British Royal Family enthusiast will want to add to their vocabulary to sound a bit more regal.

Definition: A short break for light refreshments, usually with tea or coffee, taken about 11am, not to be confused with ‘brunch’.

Definition: A rich person, particularly someone who exudes an air of superiority and is usually considered a member of the upper class.

Definition: A person’s facial expression regarding the form or proportions of the features. You can say something like, “there was something hidden behind his visage of cheerfulness.”

Definition: An equerry is an officer of the British royal household who attends or assists members of the Royal Family. The Queen’s equerry is one of the most immediate personal contacts with the monarch.

Definition: The amount of money given to the British King or Queen for personal expenses.

Definition: Child’s word for mother. Most will call their parents ‘mum’ or ‘dad’, but as fans might remember from ‘The Crown’, “mummy” is the term Prince Charles (at 73 years) still uses to refer to the Queen.

Definition: It refers to the course at the end of the meal, also known by commoners as “dessert.”

Definition: A portion of food served to a person at one time. Royals will never ask for a second “portion” of food. They will always refer to it as “helping.”

Definition: A room or compartment with a toilet and sink, that is, a bathroom. If fans want to sound regal, avoid terms like “toilet” or even “bathroom.”

Definition: Also known as the common people or the masses. A commoner is a person who is not a member of the nobility, or in other words, an ordinary person who doesn’t have a title. Many ‘commoners’ have wed royals, including Meghan Markle, Kate Middleton, and more.

Amy Pritchett, a Student Success Manager from the language learning site Preply offered her top tips for learning to speak the Queen’s English to Express.co.uk.

She said: “When non-British people talk about ‘a British accent’, they usually refer to an accent called Received Pronunciation (RP), also known as the Queen’s English, a formal way of speaking British English that, with time and practice, anyone can learn.

“So, if you truly want to sound like an English noble, here’s what you need to do.

“A few that we can recommend are The Crown, The Great British Bake-off, Doctor Who, and Sherlock. You can also try searching Netflix for British TV shows.

“Listen to British podcasts. Podcasts are a great way to soak up any accent in its most natural form, spontaneous conversation.

“Sing along to British music. Music is another fantastic way of exposing yourself to more British English.

“Singing along can really help improve your accent. Famously British stars—from Mick Jagger to Ed Sheeran— cross the Atlantic with their vocal cords.”