Home » Lifestyle » The rise and fall of George Pell in Rome

The rise and fall of George Pell in Rome

When Cardinal George Pell gave his first press conference in 2014 as prefect of the Vatican Secretariat for the Economy, he promised a new, exemplary era of honesty, transparency and efficiency in Vatican finances.

Pope Francis has said he wants a poor church that serves the poor. Pell insisted, in typically blunt style, “a poor church doesn’t have to be poorly managed”. 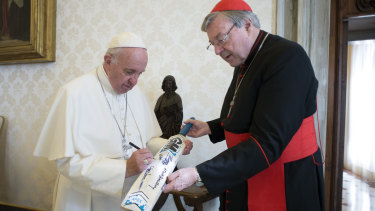 He brought with him a team, including Danny Casey, a manager from the Sydney archdiocese. After the press conference, an experienced Italian journalist remarked that it “looks like an Australian mafia has taken over”.

He did not mean they were criminals, but rather a gang with a strong leader.  Critics later began to call Pell the leader not simply strong, but overbearing.

But circumstances were favourable at first to a new broom in the area of Vatican finances. Before resigning, Pope Benedict XVI had ended the Vatican's financial exceptionalism by deciding that it must conform to European Union reporting standards. And the cardinals who had elected Francis gave him a mandate to reform the Curia, the church’s central administration, and put an end to its financial scandals.

He created a Secretariat for the Economy with Pell as its prefect. He seemed to warmly regard the Australian, whom he called a "ranger" – as in forest ranger. 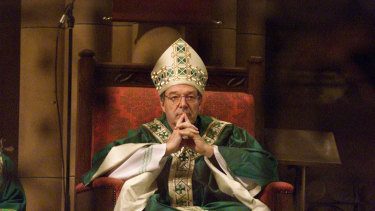 Pell during his time as Archbishop of Sydney.Credit:Peter Rae

Others, though, were not so appreciative. Francesca Chaouqui, who, before Pell’s arrival collaborated in a Vatican investigation into its finances, wrote: “Roman curialists won’t accept that a group of Australian police, who get exorbitant salaries, come into their homes and call them thieves”.

The "exorbitant salaries" were those paid to laymen on Pell’s staff who received much more than curial officials for comparable work. Their explanation for this – that their salaries were comparable to what they could earn outside the church – was met with the response: “But we’re in the Vatican, not Australia.”

Even so, Pell won the sympathy of many members of the Vatican bureaucracy, conservatives and progressives. These people wanted reform of offices that had been founded in different eras with different procedures, and which enjoyed considerable financial autonomy. 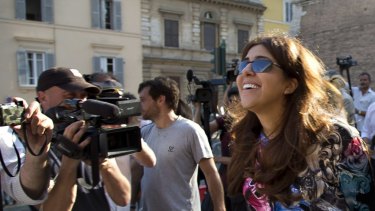 Italian communications expert Francesca Chaouqui at the Vatican in 2016.Credit:AP

Innovation and a turf war

It led quickly to a turf war. The Secretary of State, Cardinal Paolo Parolin is no crusty old reactionary. He has a reputation as the brightest and the best of Vatican diplomats. But in 2015, diplomacy was notably absent when Pell brought in an international accountancy firm, PricewaterhouseCoopers, to check all Vatican finances.

Four months later, the Secretariat of State ordered Vatican departments not to collaborate with it. Its view carried the day.

Then, when Pell announced in the London Catholic Herald that he had discovered millions of undeclared euros stashed away in the Secretariat of State, the secretariat responded that every pope upon his election was informed of the existence of these emergency funds.

Roman curialists won’t accept that a group of Australian police, who get exorbitant salaries, come into their homes and call them thieves.

The Secretariat of State suspected that Pell was grandstanding.

Pell was probably showing that he could play hard ball just as well as his enemies, whom he suspected had a hand in the anti-Pell articles also being placed in the Italian press.

Some of these stories were harmless enough (though wrong), such as mention of his rugby talent when he was actually an Australian rules ruckman.

Other details were more hostile: he was called an "ambitious mastiff" and a "spendthrift moralist" for allegedly spending €500,000 ($800,000) in his first six months in office. His secretariat responded that the figure was €290,000 euro which went not only on his Vatican apartment but for establishing a secretariat office with a chapel.

Pooling resources for the poor

Pell also  met resistance from some Vatican ministries and the Governorate of the Vatican city-state. He clashed dramatically with the head of the Vatican’s central Bank (Administration of the Patrimony of the Holy See). APSA controls Vatican stocks and its properties. Its head, Cardinal Domenico Calcagno, is nicknamed Rambo because of his firearms collection.

Pell was in the habit of emailing orders to Calcagno. This was considered a serious breach of protocol, as cardinals communicate verbally or by letter.

But this was not just a procedural battle. Under his original provisional brief, Pell presumed he controlled all Vatican property. Calcagno had a different view.

He was called an 'ambitious mastiff' and a 'spendthrift moralist' for allegedly spending €500,000 in his first six months in office.

Ultimately, Francis revised the provisional statutes of Pell’s office, confining him to "vigilance" and the budget. He could not be buying and selling property, Francis ruled.

Pell was also disappointed over his key project. He wanted to pool all the Vatican's assets and invest them shrewdly, perhaps in a Luxembourg fund. The profits he wanted to use for the poor.

The project never got off the ground. It was too capitalistic for Francis and he, with others, was wary of putting all the Vatican's financial eggs in one basket.

“Here people resent us even when our projects will obviously benefit the church” one of Pell’s staff told me. “We might as well clear out.”

This staff member did so shortly afterwards. But Pell stayed on. He introduced slightly more transparency to Vatican finances and modern, centralised accounting methods. He also ensured that Vatican finances were sufficient to pay the future pensions of its nearly 3000 employees.

Pell also maintained his hard line on doctrinal issues. It did not always help him.

At the 2015 international Synod of Bishops on Family Issues, he was one of 13 cardinals who wrote to the Pope arguing against the proposed permission for divorced Catholics to remarry in certain circumstances.

“Jesus was tough about marriage,” is a Pell line, “and so am I.”

The cardinals' letter to Francis was leaked. He was angry because, he claimed, it implied a conspiracy in the Synod.

Marx is the head of the lay-clerical council that sets guidelines for Pell's organisation, the Secretariat of the Economy. To have drawn criticism from both the Pope and Marx was no mean feat.

Also damaging was Pell's evidence to the Australian royal commission into sex abuse, in which he testified from a Roman hotel because he said he was not fit enough to fly home. Australian protesters holding placards such as "Pell go to Hell" got a good run on Italian television.

“Is the Vatican embarrassed?” I asked one curialist. 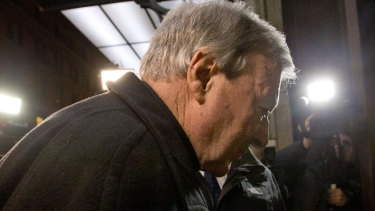 Pell arrives at the Quirinale hotel in Rome to testify via videolink to the sex abuse royal commission sitting in Sydney in 2016.Credit:AP

“Embarrassed is the understatement of the century,” he replied.

Pell's conviction on child sex offences could only be worse.

Pell’s five-year term as head of the Secretariat for the Economy expired on February 24 and it has not been renewed. He pushed through several reforms but ran into heavy weather partly because of resistance to reform, partly because of his brusque manner.

Now the Doctrinal Congregation, the successor to the Inquisition, is investigating him, which could lead to another trial.

In better days, Pell was one of the bishop members who set this organisation's guidelines.