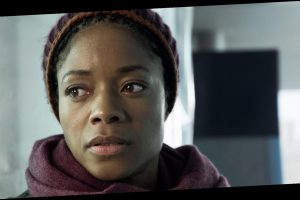 Helen (Naomie Harris) has arrived on Osea, and we have a lot of questions. Warning: this article contains spoilers for episode four of The Third Day. Read on at your own peril…

Just when we thought we were getting to the bottom of some of the Osea islanders’ secretive ways, episode four of The Third Day presents us with a whole new load of mysteries to unpick.

Despite Sam taking on the role of the island’s “father” at the end of episode 3 (a duty we saw him ‘earn’ through a series of gruelling trials during the ‘Autumn’ live event at the weekend), he’s now nowhere to be found. Instead, episode 4 sees the arrival of a brand-new protagonist in the form of Helen (Naomie Harris) and her two daughters, Ellie (Nico Parker) and Tallulah (Charlotte Gairdner-Mill).

Osea certainly looks like it’s seen better days at this point. Gone is the excitement and buzz of the summer months – as Helen drives onto Osea, it appears practically deserted, except for the weird cult-like drawings which have been painted on buildings around the island and the odd islander who seems less-than-pleased to see her.

The premise of the family’s visit – to celebrate Ellie’s birthday – is shrouded in mystery, too. Despite Helen’s assertions that she had planned the trip well in advance because Ellie loves archaeology (and the island is shrouded in history), there are clues that things aren’t quite as they seem – besides admitting that she booked the Airbnb that morning, Helen’s mother also doesn’t seem to know anything about the trip, and Ellie later admits that she hasn’t been interested in archaeology for ages.

All in all, things are still pretty weird on Osea – and we have a feeling there’s even more strangeness to come from this little Essex island. So, without further ado, here’s all the big questions raised by episode 4 of The Third Day.

At the very end of the episode when Helen takes Tallulah’s iPad out of her hands and places it on the nightstand, we see a photo of Helen, the girls and Sam pop up on the screen. From the looks of things, Helen is the wife Sam was calling way back in the first episode – and chances are she’s come to Osea on a mission to find him.

If she is his wife, it certainly makes her comments about the girls “having a hard year” make a lot more sense – they were already grieving the loss of their brother, Nathan (who, it seems, is still alive), and now they’ve lost their father, too.

The Third Day: 3 unmissable moments from the ‘Autumn’ “live event” with Jude Law and Katherine Waterston

It would certainly explain a lot of things about Helen’s decision to come to the island in the first place. If she’d just come to the island to celebrate Ellie’s birthday, chances are she might have been turned off by one of the many signs they shouldn’t stay on the island, such as her Airbnb being cancelled or the hotel owner warning her to go home.

There’s also the fact that Helen can’t actually afford to take the trip, either. We know this because the girls reveal that Helen’s mother spoke to them about their mum not being able to afford the mortgage, and Helen herself later admits she can’t really afford to stay on the island. If Helen is Sam’s wife, this detail definitely ties the two together – in episode 1 of The Third Day, Sam repeatedly talks about him and his wife’s money problems and concerns about their business.

Who is giving birth?

In an attempt to find somewhere to stay on the island, Helen and her girls stumble across a half-built holiday park and decide to explore inside. While walking through the house, however, Helen stumbles upon some kind of makeshift gynaecologists’ room (kitted out with a bowl full of sheep guts) and is forced to flee when three men turn up and start to usher a screaming woman out of a car.

When, later on in the episode, Helen turns up at the island’s pub and asks the landlords, Mr and Mrs Martin, what was going on, they tell her that a pregnant woman who lives on the island didn’t want to go to the mainland for a hospital birth, so the islanders are making do on Osea.

Although it’s hard to believe anything those two say (after all, they repeatedly lied to Sam), there is a chance that the pregnant woman could be Jess (Katherine Waterston), the American woman who we met in part 1.

After all, we know she’s still on the island – her daughters make an appearance early on in the episode – and we know she’s able to get pregnant “at the drop of the hat,” something she told Sam in episode 2 after the pair slept together.

If it is Jess, it makes sense that she wouldn’t want to leave the island for treatment because, as we learnt during Saturday’s livestream, she’s decided to rebel against her controlling husband and stay on the island against his wishes. If she left the island, he might be able to get his hands on her, whereas on Osea, she’s protected.

If she’s carrying an heir to the island – as any child of Sam’s would be – the islanders might be reluctant to let her leave, too.

What’s with those weird drawings?

Besides the fact that all the islanders seem to have disappeared since the summer months, one of the biggest changes to the island has been the arrival of lots of weird drawings accompanied by words such as “DIE” and “OUT”.

These drawings are representations of the sheela na nig – traditional architectural stone carvings found all over Europe which were designed to ward off death, demons and evil. They have also been used to promote fertility – something that would make a lot of sense when you think about the mysterious “pregnant woman” the island is so focused on.

The first four episodes of The Third Day are now available to watch on Sky Go and NOW TV.

END_OF_DOCUMENT_TOKEN_TO_BE_REPLACED

END_OF_DOCUMENT_TOKEN_TO_BE_REPLACED
We and our partners use cookies on this site to improve our service, perform analytics, personalize advertising, measure advertising performance, and remember website preferences.Ok