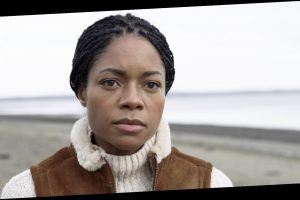 The Third Day’s penultimate episode is here, and things on Osea are going anything but smoothly for Helen and her daughters. Warning: this article contains spoilers for episode five of The Third Day. Read on at your own peril…

Just when you think you’ve got a hang of what’s going on on Osea, The Third Day comes up with something completely unexpected.

While episode five of the six-part series was certainly more straightforward than some of the previous instalments (we’re looking at you, episode two), there were still a lot of twists and turns to keep up with as Helen (Naomie Harris) and her daughters continued their adventure on the mysterious island.

A lot of the questions we had leftover from episode four were answered in this episode – we found out that Jess (Katherine Waterston) is, in fact, the “pregnant woman” everyone on the island has been talking about, and that Helen has actually come to the island to search for Sam (Jude Law), her husband, not to celebrate her daughter’s birthday.

The Third Day episode 4: who is Helen, and why has she come to Osea?

As the episode progresses, however, things get increasingly mysterious – Ellie befriends Jess’ oldest daughter, Kail (Freya Allan), who leads her into a subterranean cave, and Jess reveals her true colours as she turns on Helen’s daughter, Lu, to ensure her daughter is able to be crowned the island’s rightful leader.

By the time Helen discovers Sam is still on the island and reunites with him at the end of the episode, it’s safe to say we had a lot of questions in time for next week’s big finale. Here, we unpick a few of our thoughts ready for episode six.

Will Lu and Ellie make it off of Osea alive?

Just when we thought we’d left the murderous vibes of The Third Day part one behind, Jess pulls out a whopping big knife and tries to murder Lu, Helen’s youngest daughter.

We have to admit we didn’t see this one coming – although it’s always been clear that there’s more to Jess than meets the eye, she’s come across as a pretty decent person throughout the series so far.

Her intentions for killing Lu are related to her newborn daughter, who Helen helps her deliver earlier on in the episode. Because her daughter is actually Sam’s child (awkward), she is in line to become the island’s next leader – that is, if Sam’s other children don’t get there first.

After Lu mentions that she used to have a brother called Nathan, Jess realises she is one of Sam’s children and therefore a threat to her daughter’s position – and attempts to kill Lu in order to ensure nothing stands in her daughter’s way. Luckily, Lu gets away – but will Jess stop in her mission to ensure her daughter becomes Osea’s rightful heir?

There’s also Ellie to worry about, too. After she befriends Jess’ oldest daughter, Kail, the pair head to a subterranean cave where, we’re told, persecuted islanders came to complete religious ceremonies.

Although the pair seem to be getting along nicely – Ellie’s attracted to Kail because of her belief in God – you can’t help but feel a little suspicious about what Kail’s true intentions are. She is Jess’ daughter, after all.

What’s going to happen to Sam?

As we saw in The Third Day: Autumn, Sam has passed the series of tests required to become the island’s rightful “father” – but that doesn’t mean he’s all too happy about it.

In fact, when Helen and Sam are reunited at the end of episode five, he doesn’t seem to be doing very well at all.

Dressed in an all-white suit (the signature uniform of the island’s “father”), he seems simultaneously relieved and terrified at seeing Helen (whose real name is ‘Caz) in the flesh.

The Third Day: 3 unmissable moments from the ‘Autumn’ “live event” with Jude Law and Katherine Waterston

He is a man who is, in all senses of the word, broken.

We know he was struggling with his mental health even before he arrived on Osea, but after nine months of indoctrination, isolation and fear on the island, chances are he’s not doing much better.

There are a lot of questions here: will Sam tell Helen all about what’s been going on on the island, including the fact that her son is still alive? Will she be able to help him reunite with his daughters? And will the family be able to fight their way off the island?

Why is Osea so derelict?

From the moment Helen first arrives on Osea, it’s clear that a lot has changed since Sam’s arrival in episode one.

People are leaving, there are mysterious drawings everywhere and the islanders seem more divided than ever. And long gone is the welcoming spirit that Sam was met with on his arrival in the summer.

It’s likely that Sam’s leadership has something to do with it – after all, he doesn’t seem to be enjoying his new role very much – but we’ll just have to wait and see how thing’s play out next week.

Episodes 1-5 of The Third Day are also available to stream on Sky Go and NOW TV.

END_OF_DOCUMENT_TOKEN_TO_BE_REPLACED

END_OF_DOCUMENT_TOKEN_TO_BE_REPLACED
We and our partners use cookies on this site to improve our service, perform analytics, personalize advertising, measure advertising performance, and remember website preferences.Ok