Home » Lifestyle » The way we were: the PM banks on Australia’s narrow vision

The way we were: the PM banks on Australia’s narrow vision 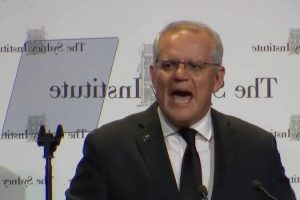 They say in campaigning you’re not cutting through until you’ve repeated your message so often it makes you want to throw up. The Prime Minister’s election year slogan – Stronger, Safer, Together – has a flying start making people feel queasy if its rehearsal at The Sydney Institute annual gala on Monday was anything to go by. It can’t have been the function food, which remained largely untouched as the guests glad-handed around the room.

The Prime Minister’s speech was as long and eager to please as a tourist town restaurant menu. You know, the type that has so many dishes of different cultural origins that nothing is a specialty. With every dish the PM served up you could imagine the microwave ping. We’re on the road to recovery – ping! Securing Australia in an uncertain world – ping! The Australian way to do a pandemic – ping! Skills, manufacturing, emissions-reducing technology, infrastructure, services – ping, ping, ping! The same lines, more or less, that the government has been serving up all year. Nothing fresh, but all served piping hot ahead of the election. 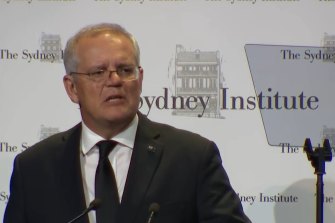 Prime Minister Scott Morrison addressed the Sydney Institute’s annual dinner on Monday night, but had no desire to out-sparkle the prosecco.Credit:Sky News

Now, I don’t think I’m generalising too much when I say few people in the crowded room were really listening closely. The institute’s founders Gerard and Anne Henderson have created an event at which the guests are more important than the guest speaker. Ever since short-lived prime minister Anthony Abbott raised the idea of austerity at the opulent event, no speaker has dared to out-sparkle the prosecco. Ideas are the meat and beer of the Sydney Institute’s inner-city cottage headquarters, but a complete distraction at a gala event. These days only the courageous wax eloquent in politics.

Nonetheless, there was plenty to be gleaned from the long-awaited event.

For a start, there was a notable absence of stalwart conservatives. They are not yet dead, so it is telling that Morrison can draw a crowd of the professional political class but few crusaders. Morrison’s shift to an ideologically untroubled middle has had consequences.

But that hardly mattered on Monday. Morrison’s speech was not a rally or a rah-rah, but a rehearsal of a broadly pitched election campaign. Like any student of campaign history, the Prime Minister knows full well that elections aren’t won on policy but on aspiration.

You didn’t need to read between the lines to discover that Morrison is banking on the fact that the No. 1 aspiration of Australians after two years of pandemic is a return to the way things once were.

Where his predecessor Malcolm Turnbull once pitched “continuity and change” after knifing his leader, Morrison’s promise is no more change for pandemic-weary citizens.

Undoubtedly focus groups have told the campaign team that Australians want to be “back in charge of their own lives”, which means governments had better stop telling us where we can be for Christmas and with whom. From that, the strategists have identified a deeper truth: after two years of having their plans changed without notice, of ordering enough food for 50 only to have the guest list capped at five, of QR codes and COVID-19 marshals, our highest ambition is to have things back the way they were.

In 2019, Morrison flogged the line “how good is Australia” and Australians looked upon all that they had made and beheld that it was good. No need to make something great again when it’s pretty awesome already. In 2022, Morrison will celebrate the “quiet confidence” of Australians, that “enables us to believe that whatever happens, whatever comes our way, we can push through”. Crucially (and harking back to that bucolic status quo) we know we can “deal with it and preserve our unique and enviable way of life”. Continuity and, for heaven’s sake, no change.

Around about half-way through the speech, if memory serves, Morrison brought up the Granddaddy of Conservatism Edmund Burke’s “little platoons”, which are disappointingly not kindergarteners in camo gear, but “the myriad networks of family faith groups, schools, workplaces, big and small sporting clubs, book clubs, you name it”. In a room light on ideologues, the philosophy section of a speech is usually the pro-forma digression to prove that the speaker is a deep thinker. So, if my subsequent conversations are anything to go by, only I was listening to what came next.

But there was the strategy for the coming campaign. The Prime Minister promises that we will not “build back better or build back stronger”. That would be a “profound misjudgment”. Morrison assured the distracted crowd that “the reach of government in this pandemic is not some new norm”. Australians, Morrison believes, want a government that “knows its role” but also “knows its place”.

The vision is to get back to the way things were. And I reckon it just might work.

The beauty of it from a strategic perspective is that the opposition is no longer the primary enemy. The enemy is change and anyone who wants to impose any more of it on weary Australians. The opposition just happens to represent change because a vote for it would be a vote to change government.

If you were listening then – and nobody would blame you if you weren’t – you’d have noticed that Morrison’s very first speech of 2021 also ended with the slogan “Stronger, Safer and Together”. Reform, speeches, even slogans, Morrison has not changed. That then is Anthony Albanese’s challenge: how to change a nation’s mind when it is dead tired of changing.

Parnell Palme McGuinness is managing director strategy and policy at strategic communications firm Agenda C. She has in the past done work for the Australian Liberal Party and the German Greens.